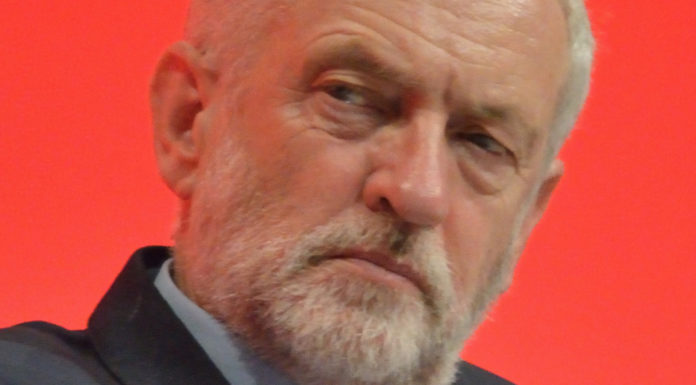 Labour leader Jeremy Corbyn’s standing in the Jewish community has reached an all-time low and now lays in tatters.

After persistent questioning Corbyn finally admitted yesterday that he was involved in a wreath-laying ceremony in Tunis in 2014 but insisted it was to commemorate a 1985 Israeli air raid.

He had previously told reporters that he was present but not involved in the wreath-laying ceremony next to the graves of PLO men who organised the Black September terrorist attack that cost the lives of 11 Israeli Olympic athletes and coaches in 1972.

Pressure had built after the Daily Mail uncovered photographs of Corbyn at the ceremony and sent a journalist to the cemetery where they discovered he had been standing by a plaque at the graves of Black September founder Salah Khalaf, his senior advisor Fakhri al-Omari and security chief Hayel Abdel-Hamid.

PLO head of intelligence Atef Bseiso, is buried close by.

Khalaf, al-Omari and Abdel-Hamid were assassinated in 1991, Bseiso the following year.

All four are linked to the Munich massacre that shook the world back in ‘72.

Chris Williamson MP was unable to confirm or deny whether Corbyn had laid a wreath at the graves when asked on BBC2’s Newsnight programme on Tuesday night.

Corbyn has to date refused to apologise to families of the Israelis murdered in Munich.

And further questions will be forthcoming on his participation at the memorial as anti-Semitism campaigners are preparing to file a formal complaint to Labour party over his attendance.

Corbyn also faces criticism after it emerged yesterday that he attended what he described as a “peace conference”, which Hamas’s leaders also attended, before the wreath-laying ceremony.

According to Bicom in a statement, the conference included Hamas co-founder Mahmoud al-Zahar, who is accused of saying that killing Jewish children is “legitimate,” Mousa Marzook, Hamas’s then second-in-command who was found guilty of financing terror by an American court and Hamas member Oussama Hamdan, who recently said the anti-Semitic myth that Jews drank Christian blood was “not a figment of imagination or something taken from a film. It is a fact”.

TheDaily Telegraph also published a photograph yesterday of Corbyn giving a four-fingered Rabaa sign, a symbol of allegiance to the Muslim Brotherhood and symbol of solidarity with victims of the 2013 Rabaa massacre in Cairo, which followed the overthrow of Egyptian president Mohamed Morsi in a military coup d’etat.

A Labour leader spokesman said he had been “standing up for democracy” when he used the symbol.

The photo is reported to have been taken during a visit to Finsbury Park mosque in 2016.

A review in 2015 of the Muslim Brotherhood found parts of the group had a “highly ambiguous relationship with violent extremism”.

On Monday, Corbyn attempted to defend his actions when he acknowledged that the Tunis event remembered 47 victims of an Israeli airstrike on Palestinian Liberation Organisation headquarters in Tunis in 1985, but denied that he took an ‘active’ role in memorialising terror leaders.

Corbyn did accept he was present when a wreath was laid, but when pressed (by a journalist) was not forthcoming that he was actually involved in the ceremony.

“I was present when it (a wreath) was laid,” he said, adding after a pause, “I don’t think I was actually involved in it.”

Twenty-four hours later as a media storm enveloped him, Corbyn finally wavered in his response to the issue when questioned during a visit to the Harper Adams University in Newport, Shropshire.

“I was there when the wreaths were laid, that’s pretty obvious,” he noted to a reporter.

“There were many others there who were witness to that. I witnessed many other people laying many wreaths.”

When pressed that he laid a wreath, he sighed, “I laid one wreath along with many other people in memory, as I’ve said, of all those who died in the awful attack in 1985, which as I keep repeating, you seem not to understand, was condemned by the whole world.”

And Corbyn refused to apologise for being at the Tunis memorial.

“I went to a conference to try and promote peace in the Middle East,” he noted.

Ignoring that he was stood by the site of the Munich terrorists was astonishing given the facts but the Labour leader’s clear participation in the ceremony followed an apparent comparison of Israel’s occupation of the West Bank to the Nazi occupation of Europe in a video from 2013.

Labour denied Corbyn made a direct link to the Nazi regime but condemnation has been swift on both matters.

And there have been calls for his resignation from some quarters.

“The laying of a wreath on the graves of the terrorists who perpetrated the Munich massacre and his comparison of Israel to the Nazis deserves unequivocal condemnation from everyone—left, right and everything in between,” Netanyahu tweeted at the start of the social media frenzy.

Corbyn described Netanyahu’s claims as “false” and attempted to move the discussion on to the recent Gaza crisis.

“What deserves unequivocal condemnation is the killing of over 160 Palestinian protesters in Gaza by Israeli forces since March, including dozens of children,” he noted.

His comments however have been dismissed by parliamentarians and lay leaders alike.

Gideon Falter, Chairman of Campaign Against Antisemitism, offered a stinging attack on Corbyn.

“The country has read and heard about anti-Semitism in private and public Labour Party meetings, blogs, tweets and Facebook comments.

“We have seen evidence of Mr Corbyn honouring terrorists and abusing Holocaust Memorial Day. Over the same period, he has released a hypocritical and insincere apology, and several statements deflecting the blame onto others.
“At this point the weight of the facts should speak loudly enough for themselves.

“His brazen lies about honouring the brutal anti-Semitic terrorists behind the Munich massacre show that he is not a decent man.

“Jeremy Corbyn is a liar, a defender of terrorists, and an anti-Semite.

“Under his leadership the Labour party presents an existential threat to the British Jewish community, not least because he so clearly supports those who brutalise and murder Jews. The fact that he remains the Leader of the Opposition shows how rotten the Labour Party itself has become.”

Foreign Secretary Jeremy Hunt was to the point in his comments.

“If Jeremy Corbyn thinks terrorism is justified for the causes he believes in, how would he as prime minister have the moral authority to condemn terrorist murders of British citizens? Unbelievable and shocking,” he noted.

Home Secretary Sajid Javid, added, “If this was the leader of any other major political party, he or she would be gone by now.”

Board of Deputies president Marie van der Zyl, speaking on BBC Radio 4, questioned how Corbyn could say he was not involved after days of being evasive.

“He has now admitted attending a memorial event for the terrorist murders of unarmed athletes.” she commented.

“In 1972, these are unarmed people who were attending the Olympics, they were savagely mutilated and murdered.”

She added that Corbyn should apologise to the widows and victims for this massacre.

“He needs to recognise that he can’t cavort with terrorists,” she commented.

“Nothing is moving forward with him. He is completely evasive.”

She also noted that a ‘Twitter war’ with Netanyahu shows a lack of credibility.

“Being ‘present’ is the same as being involved,” she said.

“When I attend a memorial, my presence alone, whether I lay a wreath or not, demonstrates my association and support.

“There can also never be a ‘fitting memorial’ for terrorists. Where is the apology?”

“It beggars belief anyone would wish to honour the terrorists behind the brutal massacre of 11 Israeli athletes at Munich,” Jennifer Gerber, director of Labour Friends of Israel, reportedly noted.

“However, it is sadly utterly unsurprising that Jeremy Corbyn appears to have done so. Others will rightly regard it is as totally sickening.”

Corbyn’s comments were also slated by Ankie Spitzer, widow of Andre, a fencing coach to the Olympic team, who told LBC radio on Tuesday that she was “very disturbed” by Corbyn’s actions.

“They were Palestinian leaders of the Black September (group) who planned, executed then murdered our loved ones,” she told presenter Nick Ferrari.
“And, we do not recall a visit of Mr Corbyn to the graves of our murdered father, sons and husbands.”

She added, “Our husbands only went to the Olympic Games in order to participate in this festival of love, peace and brotherhood but all returned home in coffins.

“For Mr Corbyn to honour these terrorists is the ultimate act of cruelty and stupidity.”

“There are clear pictures. We know that he was there so he should make a statement and say I made a grave error of judgement and apologise. That is the least he can do.”

She continued, “He (Corbyn) says that he wants a general transformation of politics but we would suggest that he first studies history and understands how terrorism undermines society and mankind.

“You do not have a place in politics or in any decent humane society when you are driven only by one side of hate.

“My heartfelt feelings go out to the British people if a hate-felt Mr Corbyn becomes Prime Minister of the UK.

“You cannot live with hate, we educated our children, 14 orphans of Munich, that they would not grow up with hate in their heart. They condemn those people involved in murdering their fathers but they have no hate for the Pal and Arab people. That is our victory.”

Back in ’72, eight Palestinian terrorists broke into apartments where the Israeli team was based.

Traveling by helicopter to a military airport, five terrorists were killed by German sharpshooters.

A further nine Israelis lost their lives in the horror incident.

The latest revelations follow a frenzy of disturbing reports on Corbyn including the ongoing anti-Semitism row within his party.