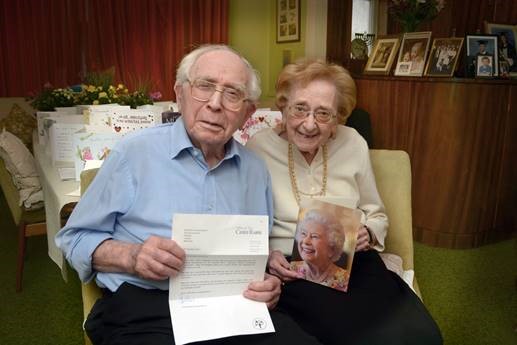 A Platinum couple have celebrated their 70th wedding anniversary surrounded by their family and friends. Incredibly Aumie and Jacqueline Shapiro have known each other since their were 8 year of age attending the same school, Bow Central, in the warm heart of the former Jewish East End, 85 years ago.
They were married at the Mile End and Bow District Synagogue, and later were members of the renowned Great Synagogue, London.
The couple, both 93 years, were lauded by Rabbi Mordechai Ginsbury as pillars of the Hendon United Synagogue and in upholding Jewish values and practice, when they attended a recent Shabbat Service, which was followed by a celebratory lunch, with their children and family.
In their Hendon home, proudly displayed is a card of congratulation bearing a photograph of the Queen, together with a personal letter from the Chief Rabbi with warm words and blessing.
Aumie was the director and founder of the Springboard Educational Trust and for 30 years produced picture books and video documentaries on the Jewish East End.
Jacqueline was a sought after soloist with the Wizo choir, and supported Aumie in his professional work. The couple who retain their sparkle and wit have grandchildren and great grand children both here and in Israel.