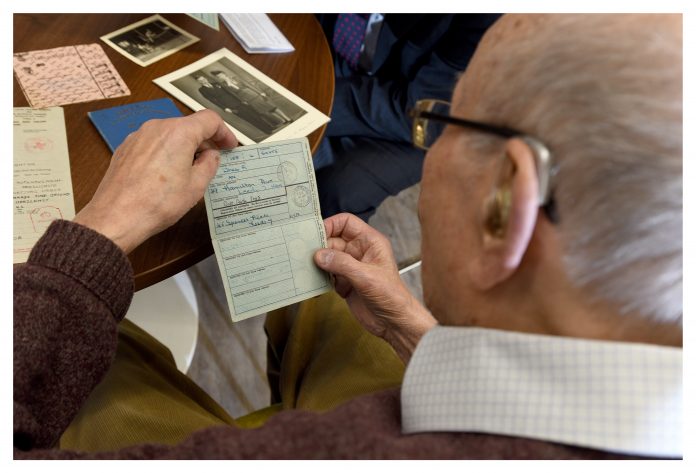 Due to open in 2018 at the University of Huddersfield, the new Holocaust Heritage and Learning Centre will attract thousands of visitors from across the region and beyond, taking people on a journey from the rise of the Nazis in Germany, the occupation of Europe, through to Germany’s surrender in 1945. The story of the Holocaust, how it happened, the impact on people’s lives and its relevance for today will be told through an exhibition featuring historical artefacts and the stories of those who experienced it, many of whom settled in Yorkshire. One such man is Heinz Skyte, who narrowly escaped the atrocities of Kristallnacht (Night of the Broken Glass) and recounts the turbulent times leading up to 1939, describing horrifying memories of torch-wielding Nazis lining the streets, burning synagogues and seeing his father sent to Dachau concentration camp for no other reason than because he was Jewish.
Pictured here lending his letters, photographs and documents, some of the precious few personal items he managed to escape Germany with, Mr Skyte shares his story: “To the visitors who come here this is perhaps just history, but to me it is my life. It is very important for me to share these items with the centre, as they are evidence for the events of the Holocaust. One of these documents is a letter from my wife’s headmaster written in 1938 when she was a young girl, banning her from the school, solely based on her Jewish faith. Another is a heartfelt note from my mother to her parents at the time they were sent to Theresienstadt concentration camp, where they sadly died just two weeks later. These items don’t just teach people of what happened, but of how genocide, in all its horror, quickly become acceptable to so many. I just hope that the people of Yorkshire and beyond will make the visit to the new Centre to understand it better. Everybody thought the Holocaust was unique, and everybody said “never again”, but it’s still happening. We have still got ethnic cleansing, and that’s why it’s important that British youngsters know about what happened and that by learning from it, generations to come will prevent it from ever happening again.”
The centre has already received support from a host of benefactors, including funding from The Heritage Lottery Fund in excess of £600,000. The scheme, which is backed by the University of Huddersfield, Pears Foundation and The Association of Jewish Refugees has also received support from notable regional businesses including Shulmans LLP, A UK top 200 law firm based in Leeds.
Simon Jackson, Head of Commercial Property at Shulmans who has been assisting the Holocaust Survivors Friendship Association on this Project, said: “The victims of the Holocaust suffered horrendously, most did not survive so recording the details of eye witnesses still with us is vitally important. Whilst having a considerable amount of understanding and knowledge of events prior to getting involved in this project, working with the team has been an enlightening process.
“The work for us started several years ago and continues in the lead up to the opening, something Shulmans has been happy to do pro bono. We are impressed to see what lengths the centre’s dedicated staff and leadership team are going to in order to ensure its authenticity, particularly the work of HSFA Chair, Lilian Black. Her strength of character, along with the survivors and their families that form The Holocaust Survivors Friendship Association, has helped get this project over the line, which will pass on the knowledge to thousands of people across the region.”
Emma King, the Centres director, added: “Over 70 years on since the end of the Holocaust, we must capture these accounts and preserve them, to ensure they are not lost forever. Todays meeting with Heinz has been incredibly humbling and adds priceless detail to our archive collection, all of which will be located at our centre in Huddersfield to educate and inform countless generations to come. We couldn’t have reached this point without the support of our many benefactors, including Shulmans who are with us today to witness the great work that they’ve helped us achieve.”