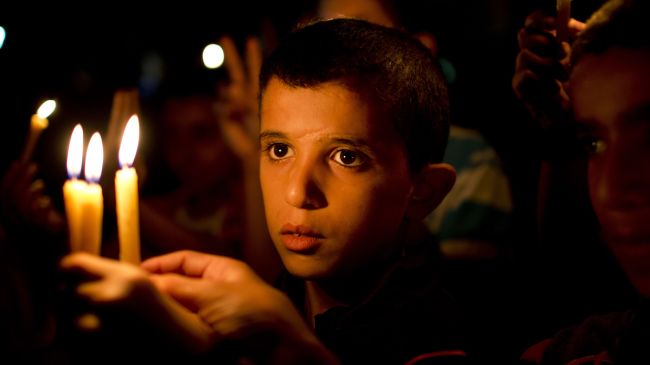 Israel’s security cabinet agreed to cut the electricity it sends to Gaza by 40 percent this week, now that the Palestinian Authority has said it intends to pay only 60% of its monthly bill.
The Hamas-controlled Gaza strip, which is home to between 1.5 to 2 million people, will now have only ﬁve hours of power a day.
The drop in electricity is part of the PA’s push to pressure Hamas to rescind its control of Gaza. Hamas has ruled Gaza since it won an election in early 2006 just after the disengagement of the Gush Katif settlements in the buﬀer zones around the strip.
But soon after it rounded up its main opposition leaders from Fatah, tied their hands behind their backs and pushed them oﬀ tall buildings.
Since last April, Gaza residents have been living on just 12 hours of power a day, which is when the PA imposed an onerous tax on the diesel fuel needed to run the Gaza power plant.
Hamas said if the electricity is cut by a further 40%, it will lead to a deterioration of conditions in Gaza. They warned of an “explosion” in the strip.
Last month, the Palestinian Authority told Israel that it would pay only NIS 25 million of the NIS 40 million monthly bill for 125 megawatts. Israel was reported to have ceded to the PA request of cutting the electricity.
“The Israeli occupation’s decision to reduce electricity to the strip at the behest of PA President Mahmoud Abbas is catastrophic and dangerous,” Hamas spokesman Abdel Latif al-Qanou said in an oﬃcial statement. “It will hasten the deterioration of the situation and its explosion in the Strip.”
Security sources said that for the last few months, the Coordinator of Government Activities in the Territories Major-General Yoav Mordechai unsuccessfully turned to the international community, both organisations and governments, in an eﬀort to raise funds
for covering the Gaza energy bill.
The security source said that the civilian impact of the cabinet’s decision would be a drop of about 45 minutes of electricity a day, if Hamas didn’t divert the power for non-civilian use, such as to build tunnels to attack Israel. Speaking about the cabinet decision in the Knesset on Monday, Defence Minister Avigdor Liberman blamed Hamas for the crisis, saying it had spent tax money on the tunnels rather than developing the Strip.
“For the ﬁrst time, Gaza residents realise that the current crisis has no connection to Israel and that their money has been stolen from them,” Liberman said.
“It’s between Fatah and Hamas, and their leaders, PA’s Abbas and the head of Hamas in Gaza, Yahya Sinwar,” said Liberman as he addressed a Gaza caucus meeting.
Yesh Atid party head Yair Lapid spoke against the security cabinet’s decision. “I don’t think anyone is worried that Gaza will turn into the Garden of Eden if it has
running water and more than six hours of electricity a day,”
Lapid said. “There should be a way to target Hamas without harming the civilians in Gaza,” he stated. Lapid also warned that bacteria and disease knew no boundaries and that if an epidemic would break out in Gaza as a result of the absence of electricity, it would quickly make its way to Israel.
The Gaza power plant, which had provided between 90-120 Megawatts, shut down because it could not aﬀord the tax, which doubled the price of operating the plant. This left Israel, which provides Gaza with 125 Megawatts, as Gaza’s sole provider of electricity. Egypt provides 27 Megawatts, but its three electricity lines are rarely operational. Hamas has said it would purchase fuel only if the PA waives the sizable taxes levied on it. For its part, the PA has said that the taxes are an important source of revenue. The UN and left-wing NGOs
have warned of a humanitarian crisis if the electricity shortage worsens or is prolonged. The absence of electricity means that water cannot be puriﬁed for drinking, untreated sewage spills into the sea and life-saving health services are not available. On Sunday, the NGO Gisha – Legal Centre for Freedom of Movement wrote a letter to Liberman urging him not to reduce power further.
“The diminished supply of electricity has serious and far-reaching implications: 100 million litres of untreated sewage are pumped into the Mediterranean Sea daily,” Gisha wrote. “Water desalination stations cannot operate; sewage cannot be pumped away from residential areas; generators are overextended; entire hospital wings are shut down during blackouts, and people who rely on life-saving equipment are at risk,” Gisha explained. The UN has made similar remarks but has not oﬀered an alternative.