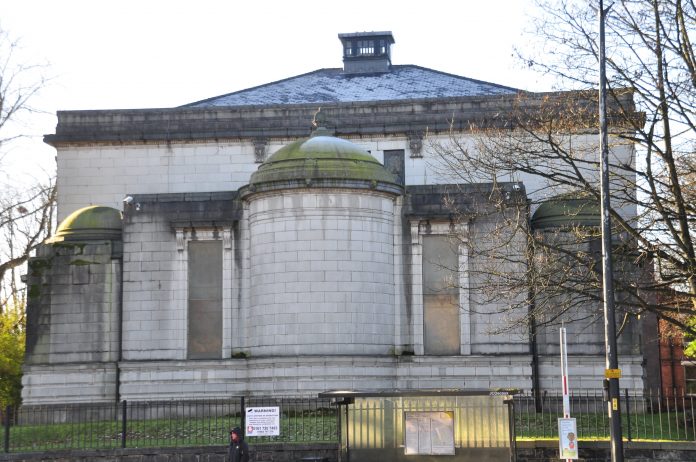 Higher Crumpsall & Higher Broughton Hebrew Congregation’s premises officially changed ownership this past Tuesday, as Yeshivas Sha’arie Chaim bought out the historic 900-seat synagogue and site, located on Bury Old Road in North Manchester’s Cheetham Hill area.
The historic shul, which opened in 1928, was famed for its cantilever ladies’ gallery, and the shul was world-renowned for its chazan and choir throughout many years.

Rabbi Arnold Saunders has led the congregation for the past 26 years. He told The Jewish Weekly, “this is obviously an exceedingly emotional time for me and my family, as I have led this congregation for nearly 27 years. I got married in the shul, and was privileged to conduct many Simchas in this beautiful building, including my own children’s Bar Mitzva’s and Chupa’s. It is clearly the end of an era, and it is of course sad that nearly 100 years of davening will cease for our congregation. However, I am pleased that it has been sold to a Yeshiva. It will used as more then just a shul, as it will become a dedicated community centre as well as a place of davening and learning. The Torah and Tefilla embedded in the walls over the last 9 decades will now join with this new era of Jewish learning set to take place.”

Rabbi Saunders confirmed that the congregation will carry on in some form. “We are negotiating with the new owners to carry on for the time being in the current premises. Once the time comes to completely move out, we will still look to keep some sense of community, including sending out weekly Sermons, events and of course the burial board will continue as normal.”

A demographic shift in the local Jewish community was cited as one of the main reasons for the sale.

Eileen Somers, 95 next month, has been shul administrator for three decades supported by her family.

“Recent stories about mismanagement and mismarketing are simply not the case,” said Eileen’s son Danny, who has been in charge of shul security in recent times.
“It’s a miracle we have continued; closure is down to a dwindling membership.
When I was a kid, you could not get a seat but things change.

Back in 1928 the area was jam-packed with Jewish people but times move on.
People have moved to the area, which has every degree of Orthodoxy, but they want to daven in their own congregations.

People have criticised us but we have been like a cultural centre to the community. We’ve hosted ‘The Boys Minyan’, which attracts 1,000 boys for Tehillim for many years.
We’re an elderly community, the building needs attention and a new community will do that.

We wanted to sell to a Yeshiva and they have been really honorable. They are going to be very respectful and we have got on very well.”

Danny added, “We’ve had great support from the CST and other organisations over the years. Also, we have had fantastic clergy together with choirs.

Rabbi Saunders has been fantastic towards the community for the past 27 years.
He’s headed the congregation and is trying to maintain some form of service. We hope that will be the case and a decision will be made in the next few weeks.”