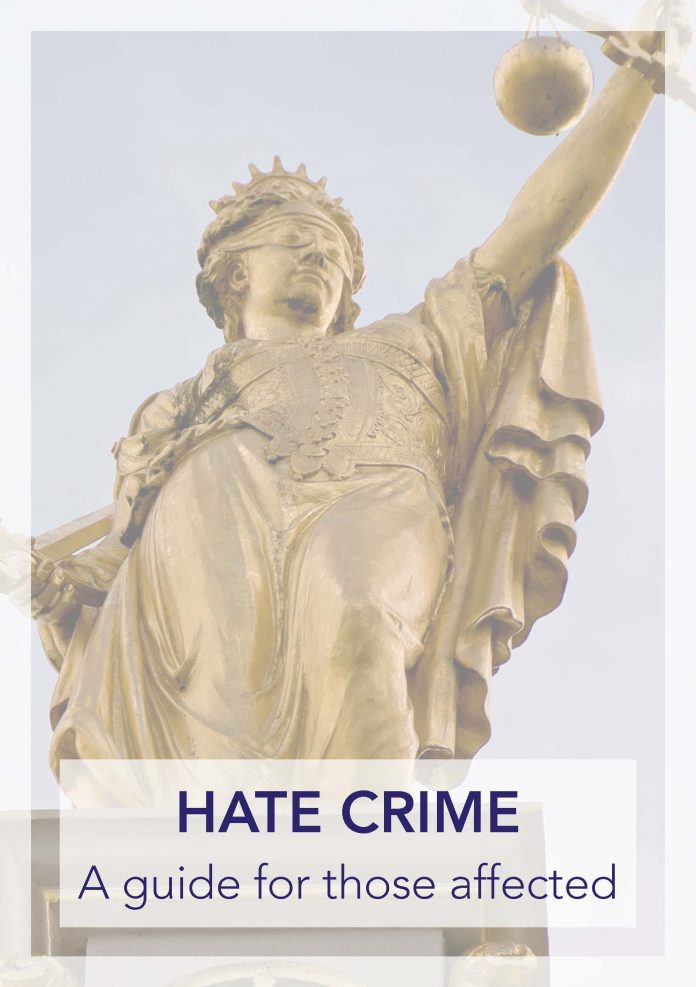 CST has recently published a comprehensive guide for those affected by Hate Crime, co-authored with the Crown Prosecution Service and Tell MAMA, and supported by the Department of Communities and Local Government.
The guide provides guidance and advice for victims and witnesses of hate crime on how to navigate the criminal justice system, from how to react to and report a hate crime to understanding the law and processes of the UK court system.
Though the guide has a focus on antisemitism and anti-Muslim hatred, its advice can, and should, be used by anybody who has suffered any kind of hate crime, which can occur due to race, religion, sexuality, age, disability, gender or any other characteristic.
The publication of this guide is a natural continuation of the longstanding work that CST engages in everyday within the Jewish community, and in recent years with other communities affected by hate crime. CST is proud of our close relationship with Tell MAMA, a national campaign that tackles anti-Muslim hatred, and with allies who combat all forms of discrimination, forged through working partnerships such as CATCH in London and Stand Up! nationwide.
Levels of reported hate crime continues to grow in the UK, and as it does, collaborative efforts to educate and inform those affected by it are increasingly important.
Introductory statements within the guide include:

David S Delew, Chief Executive, CST
Despite our best efforts to combat all forms of hate crime and hate incidents, levels of antisemitism and anti-Muslim hatred in the UK are unfortunately on the rise. CST works hard to protect, support and inform victims of antisemitism. This collaborative guide will be an important tool for all those affected by hate crime in understanding their rights, and how to navigate the complicated criminal justice system.

Rt Hon Sajid Javid MP, Communities Secretary:
Hate crime against any community is entirely unacceptable. Everyone in this country has a right to live without fear of abuse or attack and we must, as a nation, firmly condemn hate crimes and all other forms of bigotry. It is vital that victims have the confidence to report crimes to the Police. This Government is committed to making sure that those who perpetuate hate are subject to the full force of the law – but we cannot do this alone. This guide is an example of how we can work together to stamp out hate crime and support victims in bringing their cases forward so that justice can be served.

Alison Saunders CB, Director of Public Prosecutions, Crown Prosecution Service:
We want communities and individuals to have the confidence to come forward and report these offences, no matter how minor they may appear. This guide is an important way of ensuring that victims can make informed decisions about the most appropriate course of action, taking account of their particular personal circumstances. Hate crime divides communities and the CPS has an absolute commitment to bring perpetrators to justice and support victims and witnessed through the criminal justice system.

Iman Atta OBE, Director Tell MAMA
We have seen a rise over the last five years in the reporting of anti-Muslim hatred. Tell MAMA has been at the vanguard of supporting victims of anti-Muslim hatred, whilst collecting evidence and mapping, monitoring and measuring incidents across the United Kingdom. Through partnership work in the production of materials such as this guide, we hope that we can collectively make it easier for people to report, take charge and feel confident when they report hate incidents. We stand together with other communities in working to counter hatred, intolerance and bigotry.

In response to the CST’s launch of their guide, ‘Hate Crime: A guide for those affected’ today and the CPS cracking down on social media hate crime, Simon Johnson, chief executive of the Jewish Leadership Council (JLC) made the following comment:
“Whilst the UK is by no means ‘awash’ with antisemitism and religious hostility, we know from recently released CST statistics that there is a measurable rise that needs to be addressed. The CPS’s public commitment to tackling online hate crime is certainly a step in the right direction, as is today’s guide from the CST, Tel Mama, DCLG and the CPS for those affected by hate crime.
“Over recent years we have seen racist messaging move within the reach of the young and impressionable. We have also seen racist and anti-Semitic content persist in the public domain for weeks – even months – after being identified. The CPS is taking the lead in this area, and we hope that social media companies will follow suit and crack down on this vile online hate speech.”
Visit www.cst.org.uk to download the guide.