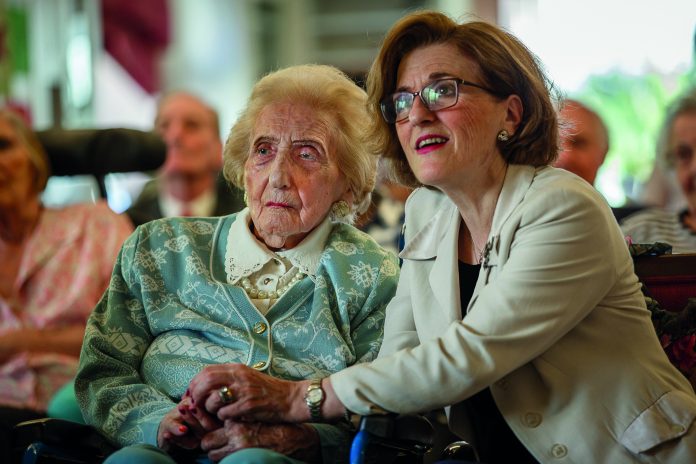 Phyllis Kleiner celebrated her 101st birthday in style surrounded by family, friends, residents and staff at Nightingale House in South London.
Phyllis’ daughter Joy organised a musical concert on the Wohl Wing, where Phyllis has resided for the past six years.
Phyllis (née Hirschfeld) came to London from Birmingham at the age of eight and married Mark Kleiner in 1938. Her father-in-law, Joseph Kleiner was a founder of the former South West London Synagogue and was a joint treasurer at Nightingale House, retiring in 1957. He fundraised and volunteered for over 60 years, along with her husband’s cousins, who were also trustees at Nightingale. Her aunt was Lady Stern (nee Sybil Tuck), Lord Wandsworth’s sister-in-law, and her great grandfather was the legendery engraver and printer, Raphael Tuck.
During WW2 Phyllis was in the WVS as deputy Area Warden for Hendon and housed and gave shelter to a family with a 16 year old daughter whose house had been bombed. When Phyllis moved to Hammerson House in 2001, Rosemary Wilcox, a fellow resident recognised her. It turns out Rosemary was the 16 year old daughter – the pair hadn’t seen each other in over 60 years but became firm friends, and now both live in Nightingale House and remain close. In fact, Rosemary participated in Phyllis’s birthday festivities.
A lovely time was had celebrating by all residents, and a number of Phyllis’ friends who have moved to Nightingale House since Hammerson House closed for redevelopment were able to join Phyllis in celebrating her special day.
Joy Meier, Phyllis’ daughter said: “It was delightful to share my mother’s 101st birthday with residents and staff. We all had a lovely time. We especially enjoyed the chocolate brownie cake!”
Anna Platman, a resident at Nightingale House who moved from Hammerson earlier this year said: “It’s wonderful that we are able to celebrate Phyllis’ 101st birthday together”.