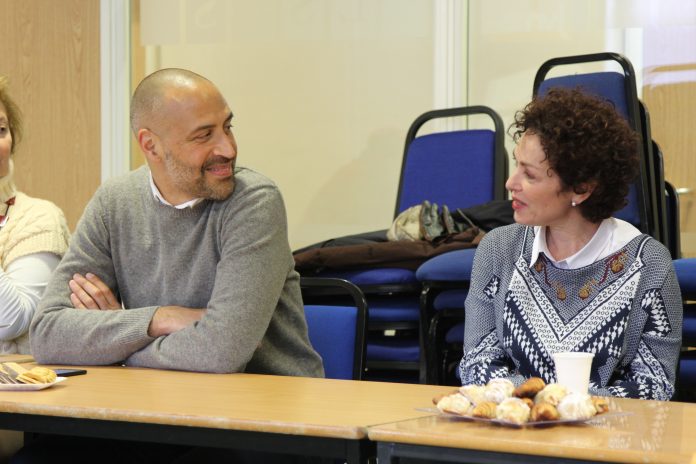 Matthew Ryder, the Deputy Mayor of London for Social Integration, Social Mobility and Community Engagement met JVN staff and volunteers to understand how the leading faith-based volunteering organisation was complementing the Mayor’s new social integration strategy, part of which is to ensure a tool is available for people to mobilise around social action in the community.
In anticipation of informing JVN about his work, he was both surprised and delighted that the charity seemed to be very closely aligned with his plans. He noted that “JVN is the model for other organisations and are the future of volunteering for London because they have a unique product.”
Matthew clearly recognised that faith communities knew their members better than most and understood the values inherent in volunteering. He had grown up in the Barnet area where his mother had been a volunteer in the CAB and he has always valued the important of volunteering in his family life. When asked about funding for volunteering and mental health projects, he agreed that a lot of words had been spoken but there were limited funds.
The Deputy Mayor, who was accompanied by members of Team London, praised the work of the JVN, particularly in the interfaith arena. He was made aware that JVN had helped and supported Caritas Westminster to develop its website and is currently working with The Faith Forum for London and some Muslim organisations to establish a Muslim Volunteering Network. He commented, “JVN builds bridges with other faith communities and it’s fantastic how we share expertise.”
Matthew believes that this cross-fertilisation of ideas, together with the sharing of good practice, were key components for cohesion and offered opportunity for more engagement in community life. He said about volunteering that it was “a silver bullet to cut through difficulties when people say things can’t be done,” and was looking forward to spreading the message about what JVN does and take it back to City Hall. “We need a community-based organisation to understand and connect with – which other orgs may not be able to do. JVN is valuable to Barnet and across London.”
JVN is grateful for the support of Team London and will seek to enhance that relationship over the next few months. Leonie Lewis MBE, Director of JVN, said “We were privileged to receive such a visit which was both informative and supporting of our work and we’re looking forward to an ever closer relationship with the Mayor’s office in the coming year.”