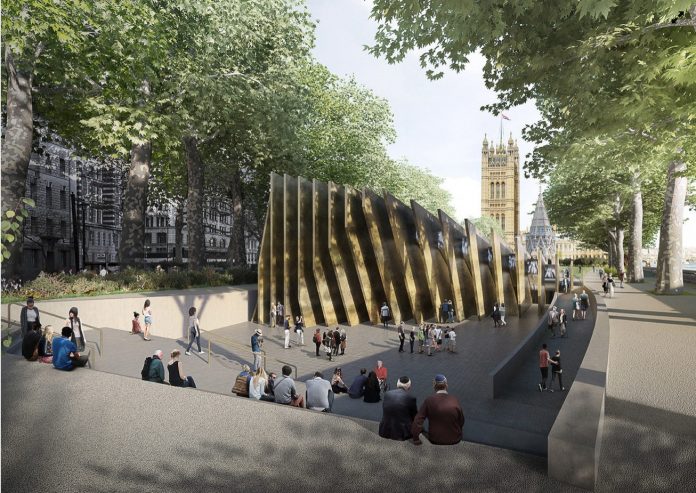 British architecture team Adjaye Associates and Ron Arad Architects have been selected to design the new Holocaust Memorial and Learning Centre close to the Houses of Parliament.
A jury including Chief Rabbi Ephraim Mirvis, Mayor of London Sadiq Khan, Secretary of State for Communities and Local Government Sajid Javid together withHolocaust survivors and design experts unanimously selected the winning team for the prestigious project.
The memorial will be built in Victoria Tower Gardens, opposite Parliament, alongside a learning centre.
The ten finalists for the international design competition came from a 92-strong entry.
Sir David Adjaye, known for creating sensitive yet compelling designs, leads the design team.
Speaking on behalf of the team, he commented, “We wanted to create a living place, not just a monument to something of the past.”
Sir David added, “We wanted to orchestrate an experience that reminds us of the fragility and constant strife for a more equitable world.”
His recent work includes the National Museum of African American History and Culture in Washington D.C. and the Idea Stores in London’s Tower Hamlets.
The jury praised the winning team’s proposal to create “a living place, not just a monument to something of the past” and a desire to create an immersive journey for visitors entering a memorial embedded in the land.
The successful bid was deemed visually arresting whilst sensitive to its location and context. The concept was found to have clear potential to be an iconic memorial and intriguing educational experience, attracting visitors from the UK and beyond to learn and reflect.
The Chief Rabbi has led plaudits to the winning design.
“The question of how we will memorialise the Holocaust in the years to come, in a society which will no longer be able to rely on first-hand testimony of survivors, is one that should occupy the mind of every one of us,” he said.
“Today, the British nation has taken an important and historic step in offering our answer to that question.
“The outstanding winning concept will provide an entry point for a greater national understanding of the Holocaust and its contemporary relevance.
“This timely memorial will encourage and inspire peaceful coexistence and tolerance and will lead to a better appreciation of what can happen when hatred is allowed to develop unchecked.”
Mayor Khan said, “This unique and immersive memorial is not just for Londoners but for the whole of the UK. It will ensure the horrors of the Holocaust are never forgotten and will stand as a powerful reminder to future generations about the fragility of peace.”
Board of Deputies President Jonathan Arkush congratulated the architectural team.
“The design is at once sympathetic to its setting and also appropriately disruptive,” he said. “Our hope is that the finished memorial will provide a fitting monument to the suffering of the victims of the Shoah,.
“We pay tribute to the distinguished judging panel which has painstakingly examined and scrutinised a large number of very high quality designs and performed the difficult task of selecting the deserving winner.”
Mr Arkush added, “We warmly welcome the commitment that the Government has shown to recognising the enormity of the Shoah and its lessons for humanity. The memorial’s location at the heart of political life in our capital city underscores its significance and the particular responsibility of our politicians to stand up to hatred, particularly in these days of rising populism and extremism.
“A memorial on its own would be devoid of context and would fail to convey meaning. We therefore strongly support combining the memorial with a learning centre so that the true facts of the cruelty and mass murder that characterised the Holocaust, and its lessons about the importance of opposing prejudice, can be effectively brought home to future generations.”
Olivia Marks-Woldman of the Holocaust Memorial Day Trust said in a statement, “We look forward to working with the UKHMF to ensure that the memorial plays a central role in national and local commemorations that the Holocaust Memorial Day Trust runs every year all around the country.”
Jonathan Goldstein, Chair of the Jewish Leadership Council, added: “We are thrilled that the new National Holocaust Memorial and Learning Centre is a step closer.
“At a time when hate crime is on the rise, it is more important than ever to educate about the consequences of unchecked and senseless hatred. This iconic memorial will not only be a reminder of where hate can lead but also a symbol of where we as a country stand on this issue. Having a memorial in the heart of our democracy sends a very clear message that hatred has no place in Britain and will be challenged at every juncture.
“We want to thank the Prime Minister for seeing through the work of her predecessor and for recognising the importance of educating on the tragedies of the Holocaust.”
Located next to the Houses of Parliament in Westminster, the Holocaust memorial will honour the six million Jewish men, women and children who were murdered, and all other victims of Nazi persecution including Roma, gay and disabled people.
The co-located learning centre will utilise stories and facts of the Holocaust to explore anti-Semitism, extremism, Islamophobia, racism, homophobia and other forms of hatred and prejudice in society today.
From its location next to Parliament it will ask questions about the role of society and institutions in encouraging respect for others and preventing hatred.
The winning concept is at an early design stage and will undergo development through discussion with Holocaust experts, survivors, victim groups, local residents, Westminster City Council, Historic England, Royal Parks and statutory consultants.
The United Kingdom Holocaust Memorial Foundation will work closely with experts on the contents and approach of the centre as part of this process,
It is hoped the initiative will be completed by 2021.