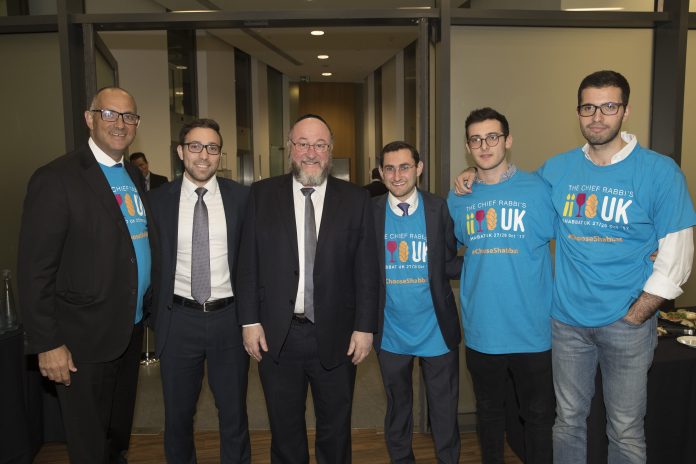 Corporate workers broke off from busy schedules to don aprons for the special initiative, which was organised and hosted by Deloitte’s Jewish Network. Financiers, consultants, lawyers and accountants from firms including Investec, Goldman Sachs, Morgan Stanley, JP Morgan, Bank of America, AIG, Linklaters, PWC, Mazars, Ashurst and UBS participated and took challot home to bake in time for ShabbatUK 2017, which begins tomorrow night across the United Kingdom.

Gideon Glass, a Consultant at Deloitte, told The Jewish Weekly how proud he was to have helped co-ordinate the event. “It has been a real privilege to host the Chief Rabbi for the first ever Challah Make in the City.” Gideon said further that “they would love to host it again, and that we owe a great deal of thanks to Rebbetzen FredaKaplan for doing such an unbelievable job, especially in helping to make my own challah edible!

Fiona Kaufman, also of Deloitte’s Jewish Network remarked how delightful it was to see so many professionals come together to make challah in the City. Ben Judah of DrDoctor, a City firm that uses technology to help providers and patients work together for more effective care at a lower cost, commented how wonderful it was that “the first Shabbat back in the UK after living in Israel for five years, will now be even more special as I will have my very own self-made challah on the Shabbat table!”

“ShabbatUK gives us an opportunity to celebrate the timeless relevance of our faith and enables us to share uninterrupted quality time with our friends, families and communities,” said the Chief Rabbi.

A ShabbatUK spokesperson added: “This is a remarkable event because it demonstrates the power of the ShabbatUK experience. No matter what the pressures of the professional working day, there is always time to pause and make time for faith and tradition.” Rebbetzen Freda Kaplan enthused how special it was to “watch people coming together to balance spirituality with busy working lives.”

Aside from Deloittes, other corporate firms got involved with activities. Clifford Chance hosted a ‘lunch ‘n’ learn’, KPMG organised an interfaith challah make for 60 people from faith networks across the organisation whilst Investec partnered ShabbatUK.

Away from the corporate world, kosher shops have got into the ShabbatUK spirit. Many Kosher shops offered special deals for everything Shabbat related. Synagogues from London to Belfast, Glasgow and Cardiff have run events including challah makes to musical concerts and many Friday night dinners are planned. Guest speakers and Chazanim will be out in force as the largest number of participants to date gets involved.

Meantime, the ice cream van has continued its whistle-stop tour to Jewish organisations handing out free ice creams to over 5000 children. Uncle Doovy’s van, which has been specially rebranded for ShabbatUK, and sponsored by The Jewish Weekly, Mendy’s, Kedem and Tribe will have clocked up over a thousand miles by the weekend.

The big weekend will conclude at the HavdalahUK grand finale concert at Watford Colosseum on Motzei Shabbat when A Capella group The Maccabeats are the star turn alongside folk-rock duo The Portnoy Brothers, and Jewish comic Ashley Blaker, who will be hosting the event.