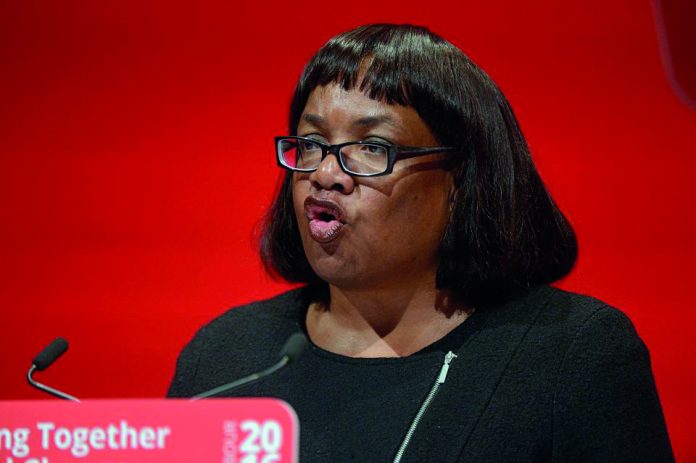 Stamford Hill’s strictly Orthodox community are split on whether a Conservative or Liberal Democrat candidate would be better for the area if Labour MP Diane Abbott were to step down. But despite her disastrous LBC Radio interview with breakfast host Nick Ferrari on Tuesday morning, Ms Abbott plans to defend her 24,000 majority for Hackney North and Stoke Newington.

Labour announced it would be recruiting 10,000 police officers paid for by reversing cuts to capital gains tax introduced by the Conservatives, and the Shadow Home Secretary was sent out to sell the policy. However Ms Abbott got lost when asked how much the officers would cost. She first said £300,000, which would mean £30 each, and then when pushed she changed the figure to £80 million. When asked to explain how she got to that figure, she fumbled badly and was left lost for words.

The interview became the top story across the country as hundreds of thousands of people watched and shared the car-crash interview. Afterward, Ms Abbott insisted that she did know the figures on funding for Labour’s policing policy but simply misspoke.

Ms Abbott then appeared on the BBC’s Daily Politics, where they played the agonising clip for her. But she continued to defend her performance, telling the presenter that she should ask why the Conservatives are so anxious to move the debate away from the 20,000 police officers.

But when asked repeatedly what the rate of capital gains tax was and what she would be raising it to in order to fund the policy, she appeared unable to answer.

“We are going to reverse the cuts to capital gains tax in order to fund a number of things including the 10,000 police officers,” she said, when asked specifically about the rate.

“We currently have some of the lowest rates of corporation tax in Europe.”

Asked again about what the rate was and would be, she said: “We will bring them back to where they were before, that’s the point.”

And asked again she said, “The point is that it will save us nearly £2.7 billion. That’s what we’re going to use both to pay for the 10,000 policemen and for other areas of our manifesto.”

She concluded: “We will produce a manifesto that is costed and is paid for.”

Rabbi Mordechai Engel from Stamford Hill said he would be extremely happy to see Diane Abbott removed as MP because “she is too far left with socialist anti-Israel Corbynite policies.”

When asked what has MP Diane Abbott, done for the Jewish Community, he replied “I don’t know.”

Although Rabbi Engel did admit she does appear at events and had asked questions in the House related to Orthodox matters.

Rabbi Engel was unsure whom he would vote for on 8 June but conceded a 24,000 majority would be very hard to overturn.

Diane Abbott was first elected as the MP for Hackney North and Stoke Newington at the 1987 general election, when she became the first black woman to have a seat in the Houses of Commons.