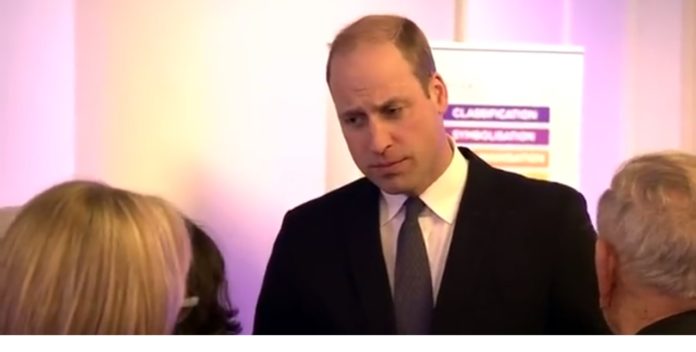 The Duke and Duchess of Cambridge honoured Holocaust survivors at Central Hall in Westminster on Monday. The UK Holocaust Memorial Day commemoration service marked the 75th anniversary of the liberation of the Auschwitz-Birkenau concentration camp and recent genocides including those in Cambodia, Rwanda, Bosnia and Darfur.

Prince William paid tribute to his great-grandmother Princess Alice, who risked her life to save a Jewish family in Athens in 1943. She was posthumously recognised by Israel in 1993.

He noted, “When the persecution of the Jews by the Germans began, Princess Alice asked to be informed about the fate of the Cohen family. Having been informed by friends and by her lady in waiting about the plight of Mrs. Cohen and her young daughter, the Princess decided to offer her hospitality to the two ladies, in fact to hide them in her home despite the danger this entailed.

“The Princess put a small two-room apartment on the third floor at the disposal of Mrs. Cohen and her daughter. It was thanks to the courageous rescue of Princess Alice that the members of the Cohen family were saved. The members of the Cohen family left the residence three weeks after liberation, aware that by virtue of the Princess’s generosity and bravery had spared them from the Nazis.”

Prince William recounted to a packed auditorium comments by Mrs Cohen’s great-granddaughter, Evy Cohen two years ago. “My family would not exist without the courageous act of Princess Alice,” he said. “Her story of incredible courage must keep being told in her memory. My generation, the past generation and the future generation are, and will eternally be, grateful to his great-grandmother Princess Alice for the great act of bravery, risking her own life to take in a family in need.”

Ian Forsyth, a wireless operator in the Royal Armoured Corps, was among the first troops to liberate Bergen-Belsen. “I hope people can realise how far mankind can sink if they are not careful,” he noted. “We must learn that freedom is for everyone. We’re not all the same but that should be celebrated. We need to stand together against oppression This is the most important lesson I can give everybody.”

Mala Tribich, who survived Ravensbruck and Bergen-Belsen, told a packed auditorium how, after liberation, she was taken to Sweden before being reunited with her brother, Sir Ben Helfgott, who also survived the Nazi tyranny.

In a moving testimony, Mala said it was her duty to speak for all those whose voices were silenced and tell of those dark days in Europe. “By speaking out it is my greatest hope that something positive will be handed down to future generations,” she noted.

Mala’s unwavering determination to remember the past made a huge impact on the Prime Minister.

“Mala said the Holocaust was unique as it was the industrialised murder of a race,” said Johnson. “As Prime Minister, I promise we will preserve this truth forever. I will make sure that we build the National Holocaust Memorial and Education Centre so future generations can never doubt what happened. That is the only way we can be certain that it will never happen again.”

He added, “I feel a deep sense of shame that here in Britain in 2020 we seem to be dealing with a resurgence of the virus of anti-Semitism and I know that I carry a responsibility as Prime Minister to do everything possible to stamp it out.”

Clearly moved by the occasion, Johnson vowed to preserve the sanctity of survivors’ testimonies from various atrocities by using technology.

“By doing so, we will ensure Britain never forgets the truth of the Holocaust,” he said.

The Chief Rabbi, in a moving address, said democratic societies had a choice to carve out a destiny.

Let us stand together in solidarity with Holocaust and genocides victims, let us confront anti-Semitsm, racism, hate speech and demonisation, and reach out with love and respect to every human being, he noted.

Chief Rabbi Mirvis added, “More than anything, as we listen to the memorial prayer (recited by Cantor Jonny Turgel), let us stand together with these survivors and give them our solemn promise that we will carry on their work in the generations to come.”

BBC newsreader Huw Edwards hosted proceedings. “History has taught the world that indifference is a conflict for yet more suffering,” he noted.

The Holocaust Memorial Day Trust arranges over 10,000 local activities across the UK.

Over 300 community groups across the country took part in HMDT’s 75 Memorial Flames project to create artwork to commemorate the 75th anniversary of the liberation of Auschwitz-Birkenau.

Four Holocaust survivors featured in portraits in a project to celebrate their lives built in the UK.

The Duchess of Cambridge, who is patron of the Royal Photographic Society, took images of Steven Frank and Yvonne Bernstein.

“The harrowing atrocities of the Holocaust, which were caused by the most unthinkable evil, will forever lay heavy in our hearts. Yet it is so often through the most unimaginable adversity that the most remarkable people flourish,” The Duchess of Cambridge said.

She added, “One of the most moving accounts I read as a young girl was ‘The Diary of Anne Frank’. Her sensitive and intimate interpretation of the horrors of the time was one of the underlying inspirations behind the images. I wanted to make the portraits deeply personal to Yvonne and Steven, a celebration of family and the life that they have built since they both arrived in Britain in the 1940s. The families brought items of personal significance with them which are included in the photographs. I hope in some way Yvonne and Steven’s memories will be kept alive as they pass the baton to the next generation.’

Olivia Marks-Woldman, HMDT, commented, “What connects these individuals is that, after systematic persecution, they all made the UK their home and the country has been enriched by them and their families.”