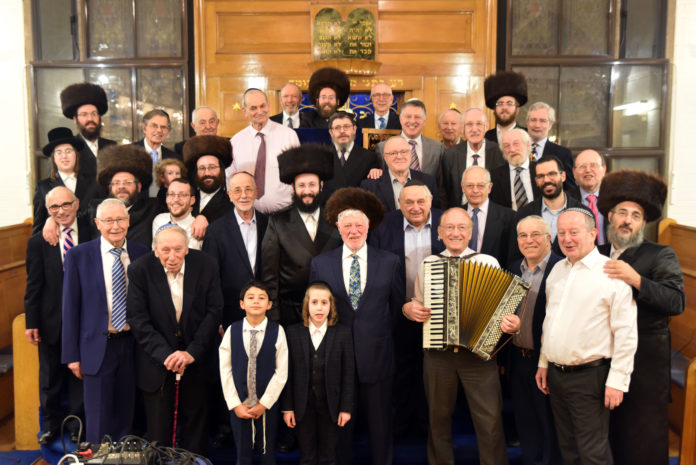 Shabbat Vayechi became a landmark Shabbat for the Kenton Jewish community as we welcomed the Travelling Chassidim for the second time.

During ShabbatUK 2019, the Kenton community had tasted the ruach and the pure joy of a Travelling Chassidim Shabbat and were eagerly anticipating their second Shabbat with us.

The Travelling Chassidim are distinguished by their outgoing personalities, their friendliness, their approachability and their openness and willingness to talk to all.

A group of nine Chassidim, some accompanied by their wives and children, joined us.

Before Minchah the Chassidim – clad in their Shabbat finery – visited two nearby Norwood homes where they sang and danced their way into the hearts and the Neshamot of the residents.  The effect of their music and enthusiasm cannot be overestimated: following last year’s inspirational music and dance has had an invaluable influence on the residents, so much so that one individual has begun to attend Kenton shul, accompanied by a carer.

As the Travelling Chassidim and their families arrived in shul, there were very happy and cheerful welcomes – especially by those who were able to renew friendships established on their previous visit.

Candles were lit in Shul by the community and the guests and following the Mincha prayer, Kabbalat Shabbat was led by the Travelling Chassidim on the bima, as they donned their Shtreimels. When they began to sing the moving tunes, their melodious voices rang out as they welcomed the holy Shabbat.  The community sat entranced, as if transported back to eras of their distant past, when they heard davening they grew up with. We were taught a wistful nostalgic niggun for ‘Shema Israel’, which was repeated throughout the Shabbat.

After Kabbalat Shabbat, 70 members of the community sat down to a very tasty Friday night dinner, catered by Reich, which was enjoyed by all and included much enthusiastic singing by the Chassidim together with community.

Dinner was followed by a marvellous ‘getting to know you’ session, when the Chassidim – standing within a circle of shtreimels – told us of their background and their working lives.  We heard from Menasche Scharf about his works in Kashrut, from Yitzchak Kohn who is a Special Needs Consultant, from Aaron Weingarten who is a schoolteacher, from Berish Dresdner from Manchester, from Daniel Admon, an Israeli now living in London, who teaches music and from Chaim Grausz who runs Masher’s in Manchester.  There was more schmoozing and singing in a very happy atmosphere late into the night; it became a joyous event with real Chassidic warmth.

Shabbat morning services was led in a truly Chassidic atmosphere by the Travelling Chassidim, joined by over 100 people who enjoyed the Davening, which was punctuated with beautiful singing.

After a well-spread kiddush – exquisitely prepared by the Ladies’ Guild – we all sat down to a long lunch with more singing of zemirot, during which the Travelling Chassidim were treated to a tune for Tzur Mishelo by one of Kenton’s own sopranos.  The boisterous dancing necessitated the removal of a number of chairs, to allow young and old to run circles around the dining hall. There was also a ‘three tenors’ moment, when a member of the Traveling Chassidim joined Kenton members – all perched on chairs – to sing a Chazzanut masterpiece. There was a ‘Question and Answer’ session, where all questions were answered candidly and flavoured with great humour.

Seudah shelishit was followed by Ma’ariv culminating in the highlight of a Travelling Chassidim weekend: a musical Havdalah with candles for all, soulful singing and lively dancing, which continued for almost two hours.  Apart from the wonderful voices, music was provided by a Travelling Chassidim keyboard player and guitarist and an accordion played by a Kenton member. They also treated us to ‘Belz, mein shtetele Belz’ as well as ‘A Yiddishe Momme’ (both sung in Yiddish).

About the Travelling Chassidim: TCUK is a branch of the original Travelling Chassidim – founded in Monsey, U.S.A..  Their aim is to spread simcha and chassidic warmth, which they successfully did in Kenton. Theirs is a ‘not for profit’ group; they do not charge for their services.  Costs for organising a weekend are borne by the host community and are sometimes subsidised by the Chief Rabbi’s Centre for Community Excellence. The host Shul would only need to arrange accommodation and travelling expenses (e.g. petrol).  The travelling Chassidim are happy to travel to any Jewish community to spread their infectious joy, unity and Ruach.

Kenton is already eagerly awaiting a third visit – slated for ShabbatUK 2021 – but at the moment we are still basking in the glow of Shabbat Vayechi, when the Travelling Chassidim came to Kenton and created such a special Shabbat with their singing, happiness and Shabbat joy.

Thanks are due to Rabbi Black of the Kenton community together with Roy Block of the shul’s ‘ReJewvenate Committee’ and the catering team as well as the Ladies’ Guild for working tirelessly to making this Shabbos a resounding success.