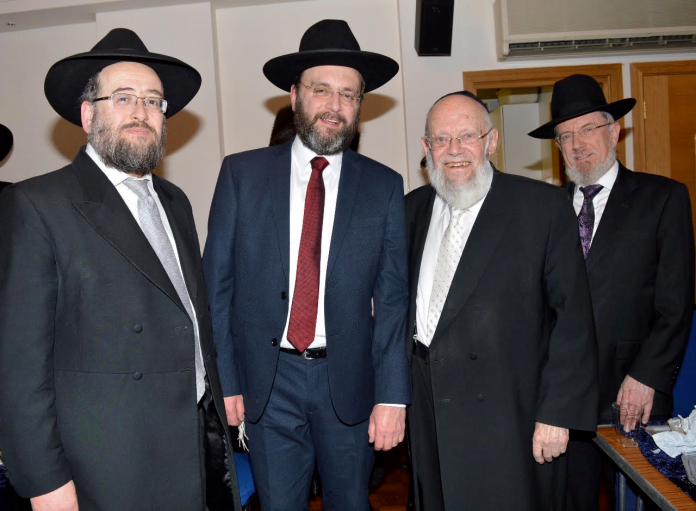 Brian Gordon
The beloved memory of Dayan Gershon Lopian, zt”l, was brought to life once again in a moving and celebratory atmosphere last motzei Shabbat. It was a Melaveh Malkah incorporating a siyum haShas (completion of the Talmud), timed for the occasion of Dayan Lopian’s third yahrtzeit.
The venue, most appropriately, was the banqueting hall of the Edgware Yeshurun Shul. Dayan Lopian had served this shul with distinction as its Rav for thirty years, until his retirement in 2006. The proceedings were introduced and chaired by the Dayan’s successor and the Shul’s current Rav, Rabbi Alan Lewis.
Rabbi Lewis referred to the highly successful Shabbos the Yeshurun kehillah had just experienced, with a vibrant programme of activities dedicated to the memory of Dayan Lopian.  He described Dayan Lopian’s greatness as a community leader, teacher, talmid chacham, a person of deep and abiding faith and a lover of people, who, together with his highly supportive Rebbetzen, enjoyed life to the full.
Rabbi Yehuda Schwarz, a senior member of the Edgware’s Kollel Beis Aharon, completed Masechtah Uktzin.  He alluded to the remarkable phenomenon of the word “siyum,” each of whose 4 Hebrew letters, when spelt out, produces another word whose first letter had a gematria (numerical equivalent) equal to that of the remaining letters.  The first letter represented an active partner and the remainder a passive partner.

This, said Rabbi Schwarz, was the combination of opposites underlying the unity of a Torah siyum, where everyone was welcome to join the celebration, regardless of whether they had actively learned.  Similarly, every mitzvah has two human counterparts – the active party who performed the mitzvah, and a passive party who was either the recipient thereof or the person encouraging the performer. “Dayan Lopian had for years been the inspiration to the community at large to perform mitzvot,” declared Rabbi Schwarz.  “He was the sleeping partner, so to speak, for hundreds of others seeking to grow in their Yiddishkeit, always supported by his Rebbetzen.”
When starting Masechtah Berachot, Rabbi David Lister, Rav of Edgware United Shul, noted that the Talmud both began and ended with the letter “mem.” Citing Chazal (our sages), Rabbi Lister said that the concluding final “mem” stood for the “maamar satum” (closed) and the opening “mem” stood for the “maamar patuach” (open).  Only by returning to the start –   learning and continually reviewing, closing and re-opening – can we fully integrate Torah into our soul and derive the full light and understanding that should be our goal.
Undoubtedly, the a highlight of the evening was the dynamic and thought-provoking derashah (speech) of the guest of honour, Dayan Chanoch Ehrentreu.  Apart from his
many other eminent portfolios, past and present,  Dayan Ehrentreu is the founder and Rosh (head) of  Kollel Beis Aharon – the much-used local institution, which is one of Edgware’s many outstanding successes.    He described Dayan Lopian as an “Adam Gadol,” a great person, who cared constantly for others, never sought honour for himself, and was sensitive to the feelings, needs and troubles of others.  He had played a key role in laying the foundations for Edgware to become the renowned makom Torah it now is.
Dayan Ehrentreu cited the observation of the Baal Haturim (a classical Torah commentary) that only 3 verses in the entire Tenach (one in the Torah in Parashat Terumah, the other two in Tehillim) commence with the conjunctive and imperative word “ure’eh” (“and see”).  These 3 verses relate respectively to the Mishkan (Tabernacle), chinuch banim (Jewish education for children) and hashkafah (proper Jewish outlook).  Each verse effectively conveys the message that even seemingly impossible ambitions were achievable with the vital ingredient of siyata diShmaya (heavenly assistance). However, this could only be merited by envisaging a clear future plan, accompanied by a determination to pursue it with unfailing bitachon (trust in G-d), regardless of all else. “The achievements of Rav Gershon’s life were the personification of this,” said Dayan Ehrentreu.
Rabbi Lewis paid tribute to all those involved in the organisation of the Melaveh Malkah, in particular Rabbi Doniel Zev Beigel of the Kollel, who coordinated the learning for the siyum, and   Mrs. Tatz and Mrs. Katzenstein,    who organised the catering. The evening concluded with bentching, led by Dayan Lopian’s son, Rabbi Chaim Moshe Lopian.