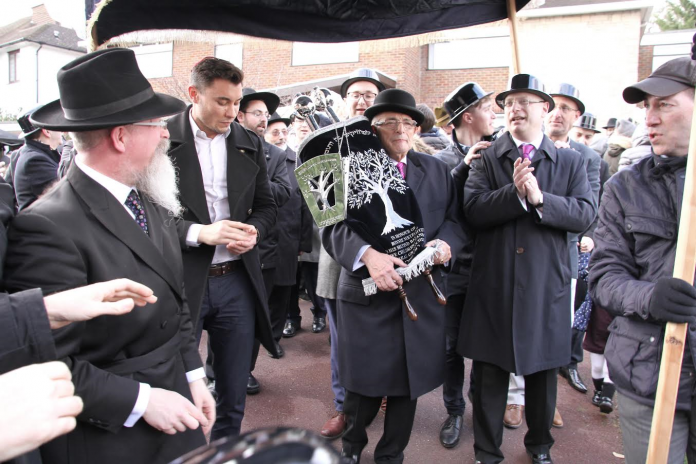 Despite the constant rain forecast for Sunday 5th March, the sun shone brightly on Stanmore Streets while a new Sefer Torah was conveyed to Stanmore & Canons Park Synagogue.

The new Sefer was presented in honour of the Community’s Honorary Life President Ronnie Metzger’s second barmitzvah by his wife Sheila, children, grandchildren and great grandchildren.

The simcha began with a large number of the community assembling at the Metzger home.  While the last 40 words were being completed by the scribe on behalf of family members, close friends and Rabbonim, a feast of scrumptious foods was being enjoyed inside the house and in the street.  Uncle Doovy’s ice cream van held court in Valencia Road, offering treats to children and adults alike. Once all the letters were dry and the Torah scroll had been dressed in its mantle and silver by the women in the family, it started its momentous journey along Valencia Road under a beautiful chupah accompanied by a 3 piece kletzmer band.

Many men took turns to both hold the supporting poles and to carry the Sefer Torah along the street.  Granddaughter Teia also took a turn at carrying a supporting pole. As the parade progressed towards the Shul, there was much impromptu singing, dancing and clapping to the infectious music which continued until the procession finally entered the Shul in London Road.

All the Community’s 17 Sifrei Torah were brought into the foyer to greet the new scroll and they re-entered the main shul together. The complete set of 18 Torah scrolls made 7 circuits, and with more singing, clapping and dancing led by Chazan Jonny Turgel, the atmosphere was more like the festival of Simchat Torah, except it was the wrong time of the year. Finally all the scrolls were all returned to their designated places in the Ark and it was time for tea and further refreshments in the shul hall.