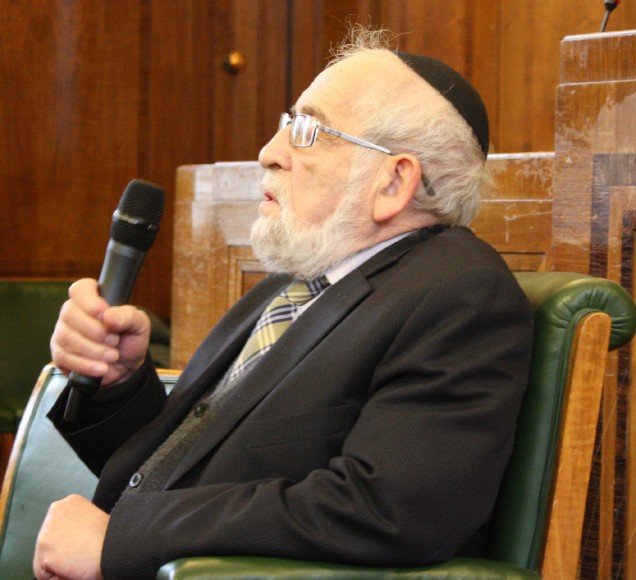 After the liberation and Mr Abelesz’s ensuing return to Kapuvar, his birthplace, some broken-hearted fellow Jewish residents of the town accosted him demanding to know why he had survived when their own children, Mr Abelesz’s peers, had not.  He was in fact the only child in the town to have returned from the Nazi inferno.

These questions, though rhetorical, were crushing for Yisroel Abelesz, who was but a teenager at the culmination of the Second World War.   For a while, he felt as though he was somehow blameworthy simply for having outlived the Nazi persecution.

Initially, all the survivors were trying to rebuild their lives and to progress towards a new and happier future and discussions of the horrors of the Holocaust were not commonplace.  However, Mr Abelesz has subsequently made it his life’s mission to travel worldwide (including Hungary) and publicise the story of the Holocaust in order to ensure that it is forever etched in the hearts and minds of all future generations and that consequently, the concerted efforts of those who seek to denounce it will prove to be futile.

Despite the unfathomable trauma to which he has been subjected, Yisroel Abelesz has not allowed his personality to become permeated with bitterness.  He is keen to point out that the non-Jews and Jews of Kapuvar enjoyed a good relationship and that when he returned to Kapuvar, non-Jewish family friends hosted him until his childhood home became habitable once more.  Some non-Jews had secreted the Abelesz family’s finances and most treasured possessions on their behalf for the duration of the war and willingly returned these to Yisroel and his older brother upon their homecoming.

Yisroel Abelesz and his older brother were joined in Kapuvar by several other of their siblings, a couple of whom subsequently became married.  He soon became an uncle and he was absolutely elated.  For Mr Abelesz, the birth of a new generation of Jewish children was surely G-d’s greatest gift to the Holocaust survivors.  It afforded them a sliver of hope after what had been the darkest point in their existence.  They had emerged from the Nazi hellhole and G-d was now granting them the chance to overturn Hitler’s designs for the destruction of the Jewish nation.

At first, the Jewish residents of Kapuvar were treated very well by the Communist Party whom the Russian liberators had selected to run Hungary.  Indeed, in stark contrast to the Jewish citizens of other parts of Hungary, they were not exposed to any anti-Semitism.  The non-Jews of Kapuvar sensed that the Communist Party viewed the Nazis, and not their Jewish victims, as the enemy and that consequently, it would not be commendable to tyrannise Jewish people.  Soon after the war, the Jewish inhabitants of Kapuvar managed to locate a Sefer Torah and they convened in someone’s home for daily prayers.  They felt uninhibited in the practice of their religion.

Although the young Yisroel was eager to be a part of the family business, his older brother prevailed upon him to attend Yeshiva in Szombathely, the tenth largest city in Hungary.  Ultimately, Yisroel’s presence at the Yeshiva was of great comfort to him.  He had been suffering from a pervasive sense of loneliness whilst in Kapuvar as there were no other children in his peer group in the entire town.  It was a source of great solace to him that in yeshiva, he was surrounded by boys of his own age.  Moreover, he was overcome with gratitude to G-d as it became apparent that many of his fellow yeshiva students had not been fortunate enough to have any surviving relatives, yet G-d had spared several of Yisroel’s siblings and had reunited them in his hometown.

He spent a couple of years in the said yeshiva before moving to a yeshiva in another town for a year.  Finally, in 1948, when he was eighteen years of age, his brother conceded to Yisroel’s unquenchable desire to return to Kapuvar and be involved in the family business.

In 1946, one of Yisroel’s brothers moved to England.  He predicted that the security and wellbeing that the Jews of Kapuvar had enjoyed since 1945 would be short-lived.  Yisroel had been reluctant to accept that this was the case.  However, by 1949, it became an irrefutable truth.  The family’s trade was severely adversely affected as the government forbade all businesses from gaining supplies from state-owned factories.  Moreover, all Jews were categorised as Zionist capitalists and were viewed as enemies of the State. The practice of the Jewish religion was quashed.  It became intolerable for Yisroel and his family to remain in the town.  The population of Kapuvar began to decrease drastically.

Some residents of Kapuvar moved to Budapest but the Abelesz family’s strategy was to leave Hungary individually, reconvene in Vienna and then move to the West.  However, devastatingly for Yisroel, one of his siblings had been arrested together with his wife and child for the crime of fleeing Hungary.  For fear of being captured too, another one of his siblings had remained in Kapuvar together with her young family and lived under constant police surveillance.  It was to be several years before these two siblings could leave Hungary.

Yisroel and twenty other young immigrants were granted entry to England through the intervention of Dr Solomon Schonfeld but it was expected that they study at a yeshiva in the East End of London immediately upon his arrival in the UK.  The new students found it extremely difficult to adjust to life in the yeshiva.  The Rabbis, though very pious individuals, were primarily interested in lecturing them as to the tenets of the holy Torah.  However, these young and vulnerable orphans had endured a horrific ordeal and they craved a parental figure in this foreign land.

Eventually, Mr Abelesz left yeshiva and tried his hand at various jobs.  He was extremely conscientious, but life was challenging for the young immigrant.  He remained determined to learn English and read many newspapers in order to attain this goal.  Initially, he moved to Stamford Hill, but he felt isolated and alienated as the English Jews could not relate to the refugees and showed them little compassion and friendship.

In due course though, he married a young lady from Israel and ultimately became prosperous in the property business.  They established a beautiful home in Golders Green and though his wife is sadly no longer alive, the couple had several children and many grandchildren and great grandchildren.

Whilst Mr Abelesz has endured a more trying life than many, he remains positive about his experiences.  Despite having been orphaned at such a tender age and having been the victim of appalling Nazi oppression, he is insistent that he has no recriminations against G-d.  As far as Mr Abelesz is concerned, G-d has blessed him with financial security and a family of whom he is rightly proud, and he bears no animosity towards G-d.  In today’s world when so many people grumble about their lives and the cards with which they have been dealt, it is humbling to meet a man who has been to Hell and back and yet offers not a word of complaint.