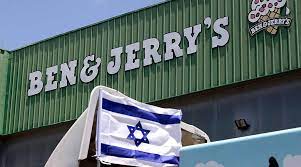 The recent decision to discontinue selling Ben and Jerry’s ice cream in selected areas of Israel has roused the Jewish world, supporters of Israel, and opponents of economic boycotting. Fortunately, the actual ramifications of this boycott are limited, or even negligible. As Israel’s economic influence continues to grow, the world is increasingly dependent upon Israeli high tech, medical technology, water management and cyber security. Countries will have to pay a steep price for their discriminatory boycotts of the only democracy in the Middle East. With God’s help, our GDP is rising while investments in Israel are skyrocketing. In the year 2021 a boycott -even by a multinational provider of food – doesn’t pose a significant economic threat. These and other important points have been cogently articulated in numerous op-ed pieces in both the Jewish and international media. It is not necessary, nor is it quite the place for Rabbis to articulate the diplomatic, economic and elements of this boycott.

However, there are deeper religious and moral messages to this struggle. The passionate responses which the boycott has elicited suggests that this isn’t just a discussion about ice cream cones. Here are three religious or moral angles to this story:

Morality of the Masses

Traditionally, ethics were articulated by thoughtful moral and religious thinkers who carefully considered the complexity of moral dilemmas.  Right or wrong, positions hatched through careful moral deliberation should carry moral weight. Unfortunately, Democracy, Capitalism and social media have all created a moral circus. Politicians assert “moral” positions in a thinly-veiled attempt to court voters. Large corporations take “moral stands” to attract consumers. Despite its human rights abuses, China isn’t being sanctioned by Unilever- the parent company of Ben and Jerry’s – because their market is too large to compromise. The Israeli market share is considerably smaller compared to the market size of BDS countries or communities.  For its part, social media has decentralized the flow of information, empowering every individual to render moral positions. Mass politics, mass consumerism and mass information flow, together, have produced a distorted theater of “mass morality”- never a recipe for balanced or sensible moral positions. It sometimes feels as if we are walking through a moral house of mirrors.

Additionally, globalization has eliminated any context or subtlety. In the global village, we are more connected to events and people across the world and feel licensed to offer uneducated moral rebuke, absent of historical context or complexity. Lack of contextualization always leads to shallow and vacant moral assertions. Globalized moral calculus also promotes “intersectionality”, or the belief that all forms of discrimination overlap or are interdependent. The writing has been on the wall for some time. If Ben and Jerry’s battles racial discrimination, advances climate reform, labors on behalf of LGBTQ+ rights, it must also campaign against the “abusive” policies of the only democracy in the Middle East. Intersectionality is the misleading byproduct of the globalization of social justice.

Welcome to the moral circus we call “modern society”. Moral relativism has muddled the notion of absolute “right and wrong”. Mass morality has emptied moral conversation of depth and context. We must strictly preserve our moral compass and protect our moral clarity from scrambled and simplified moral posturing. Popular moral positions, even when dressed in the righteous declarations of international organizations or noble agendas of socially conscious corporations, should never carry moral authority. The absolute will of God, as well as our own inherent sense of right and wrong should form our moral compass. Twitter should not reshape our moral conscience, nor should an ice cream company influence our sense of right and wrong.

Recently a Norwegian pension fund divested from Israeli companies who service the entire land and people of Israel. Though potentially, this financial impact is far more damaging than the Ben and Jerry’s boycott, this divestment announcement barely registered. Everyone loves Ben and Jerry’s while very few had ever heard of this Norwegian fund. Had it been Norwegian cruise lines it would have been a different story altogether!  Beyond the economics of this boycott many are insulted at being rejected or censured by a company we all love, and whose ice cream we crave. Why do we care so deeply?

The overall book of Devarim warns repeatedly against theological heresy and betraying God for idols. Parshat Eikev warns against a very different collapse. Jews will become too culturally comfortable with the pagan residents of Israel. They will covet gold and silver or offer to house ritual objects or other religious artifacts of their neighbors. This will, in turn yield greater social interaction serving as a potential gateway to unintended religious breakdown. Additionally, too deep an emotional connection to foreign cultures is concerning even if it doesn’t snowball into outright religious violation. Eikev doesn’t address heresy but rather the danger of culture creep and the challenge of how we invest emotionally.

Are we too emotionally invested in cultural icons? Do we too intensely admire celebrities, athletes and large corporations? Should we be insulted by a decision of the board of Unilever/Ben and Jerry’s. Are we too attached to the brand name of a jug of ice cream? Perhaps we should learn to enjoy ice- cream without revering the brand name. What do Google, Amazon, or Apple mean to us? They should mean absolutely nothing. They manufacture products we enjoy or that we employ to improve our lives. Our relationship with them should be purely transactional but not emotional. Enjoy the ice cream but without the emotional connection of brand loyalty or brand affiliation. Perhaps this decision of Unilever is a moment to take stock. Are we too attached?

A Land that Flows Ice Cream?

Parshat Eikev lists the shivat haminim- seven crops and fruits of Israel. In a fully redeemed condition, our land flows with milk, honey and supernaturally driven prosperity. We are meant to inhabit a lush country of Divine fertility. We hope and expect to, one day, reach these milestones.

However, our struggle to return to our homeland should be propelled by large ideas and historical warrant. Often, as I stroll through the overstocked aisles of my local supermarket, my imagination drifts back forty years ago to “leaner years”, during which Israel hadn’t yet achieved its current standard of living. There is nothing wrong with prosperity and especially as it has, undoubtedly, encouraged Aliyah. Furthermore, our continued economic growth is one of the many signals that this process of return has been blessed by God. However, in a stark world of lesser comforts, our idealism was more unambiguous and more palpable. Sometimes, too much comfort dulls our passion and anesthetizes our spirit.

Perhaps, after Ben and Jerry’s withdraw from the Israeli market we will have fewer ice cream options. It is more probable that a different brand will fill the vacant shelves. Nature abhors a vacuum and so does the ice cream section in the supermarket. But even in the unlikely scenario that our ice cream options diminish, our commitment to this land and its larger ideals will hopefully come into sharper relief. History is soon ending. We can all do with fewer calories and more passion. It may be a “Rocky Road” but I think we will be just fine!