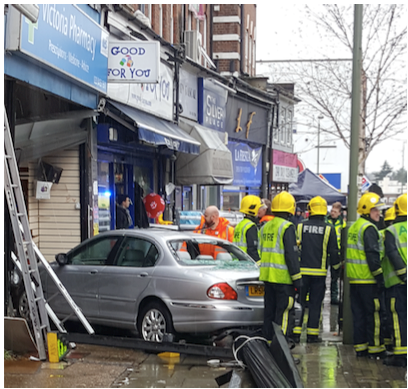 An emergency fund has been set up to help the two victims of the horrific car crash in Golders Green the Wednesday before Pesach. Shimon Elkouby, who is in his 80’s, and David Richards, 46 were both rushed to hospital, after a Jaguar mounted the pavement opposite Kosher Kingdom and ploughed into the two men, leaving Shimon trapped under the car.
Shoppers and nearby workers joined forces to lift the car off him, until the emergency services including an air ambulance arrived.
In hospital a few hours after the crash, Mr Elkouby told friends and relatives that when he had been trapped under the car, he thought that he was going to meet his Maker, and had recited the Shema in preparation.
Thankfully, they are both making good progress, and have both remarked how lucky they are to still be alive, and how thankful they are to Hashem.
Jack Bendahan, set up the fund to help with the costly expenses which are required immediately. He told the Jewish Weekly, ‘ The money that will come from insurance will take a long time to come through, as the court process can sometimes take years to complete. However, urgent money is needed now, and simply cannot wait.
‘For example, money is needed to remodel their houses to make it accessible for them in their new conditions. Pumps, costing over £1000 are needed for their chairs to prevent bedsores, toilets need to be refitted and as they cannot walk properly yet, the stairs will need to be fitted with stairlifts etc to assist them.
‘Other monies are needed for expenses such as private physio, and various medical and bathroom supplies. The online fund has currently raised £6225 out of the estimated £20,000 needed. Donations can be made online at www.justgiving.com/crowdfunding/ggaccident or envelopes can be dropped into any Kosher Deli store, marked ‘Golders Green accident.’
Abbas, from Victoria Pharmacy said: “At around 11:46 am on 28/03/18 a car ploughed into our pharmacy and unfortunately there were 2 casualties. We pray to G-d to give them and the driver a speedy recovery. Victoria Pharmacy would like to sincerely thank everyone in Golders Green, especially all our neighbors and those passing by who helped us in such a difficult time.
We would also like to thank Hatzoloh, who were first to be at the scene as well as the paramedics, the police and fire brigade for getting to us quickly. G-d bless us all.”