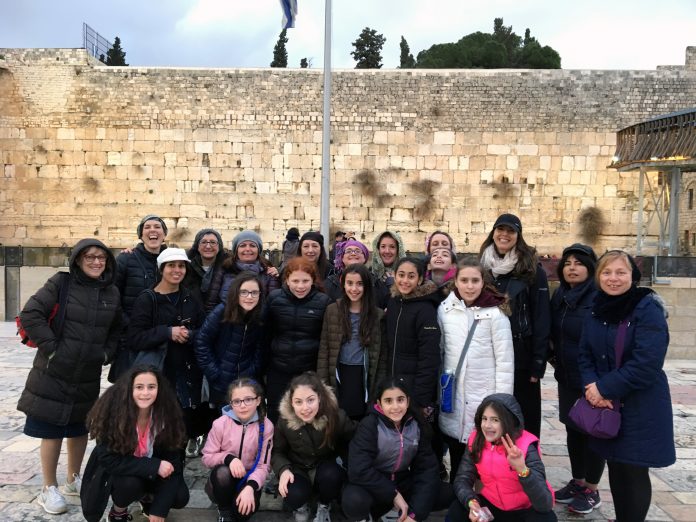 “Seeing is believing,” said British Emunah co vice-chair Sharon Dewinter who led a Mother and Daughter Israel Tour of Emunah projects and places of interest. “It was a chance for pre and post bat mitzvah girls and mothers to make friends, while learning about Emunah’s work supporting vulnerable or at-risk children through residential homes, day care, high schools and therapy and counselling services.”

The 22-strong group comprised ten mothers, one grandmother, and 11 school girls aged between ten and 12, with Mrs Dewinter’s daughter Liora, 11, among participants. Also present was Rochelle Selby, chair of the British Emunah trustees and granddaughter Ella Isaacson, 12. They were joined by British Emunah events executive Alison Cohen and director Deborah Nathan during the five-day trip.

Such was the tour’s impact that this week, Raffaella Rubens, aged ten, gave a talk on Emunah at Highgate Junior School, addressing pupils and staff. “I heard about Emunah on a Bar and Bat Mitzvah Facebook group,” explains her mum Danielle Rubens. “As it was during half-term, I thought why not? This isn’t Raffaella’s bat mitzvah year but we’re setting up a Just Giving page and asking for donations to Emunah instead of birthday presents. Before the tour, we were in contact with a girl at Emunah Afula day centre who will be her “twin” – we took her gifts and the girls hugged each other – they were very happy to be able to meet.

“The mother and daughter tour affected us deeply… it has shown Raffaella that there’s more to life outside of our north-west London bubble and to appreciate how privileged our own lives are. I think that more Jewish children [and their families] should find out about Emunah.”
Sharon Dewinter adds, “It is hard to comprehend the tragic reasons that bring children into Emunah’s care, and we were very honest about that. The young tour members showed maturity beyond their years and asked insightful questions. This was my fourth Emunah mother and daughter tour; my second time as a leader. The first time that I visited Israel with Emunah it changed me, that’s how I got involved.”
On their first trip to Israel, Lauren Matlock and daughter Shelby, 11, said the “mother and daughter tour has affected us beyond belief. I am amazed by the phenomenal work that Emunah does – how it gives children who have lost their way the chance of a better future. As someone who didn’t know what this charity does, it will be with me for life.”
Mrs Matlock was overcome with emotion in Jerusalem and her eyes welled up when visiting the Kotel. “I had waited 35 years to reach this very special place.” At Neve Landy Youth Village both mother and daughter were moved by the boys – and each young girl received a pair of Shabbat candlesticks. Returning to the UK, Shelby, a Moriah Jewish Day School student made her own plans. “Shelby has rung round a few of her friends and wants to do a fun run to raise money for Emunah. She has done that off her own back,” explains Mrs Matlock.”
The last word goes to Jamie Rubin and daughter Eden, 11, who described the Emunah Mother and Daughter Israel as “incredible… and a special time for me to be with my daughter. It has given Eden food for thought about social responsibility and what she can do to make a difference.”
The British Emunah Mother & Daughter 2018 tour participants were: Devorah and Lili Albert; Sharon and Liora Dewinter; Zivit and Liat Ezekiel; Limor and Yael Goldberg; Shelley and Olivia Herman; Gail Lamb and Katie Hilburn; Lauren and Shelby Matlock; Lucy and Tehilla Rome; Danielle and Raffaella Rubens; Jamie and Eden Rubin; Rochelle Selby and Ella Isaacson; and Alison Cohen (events executive).