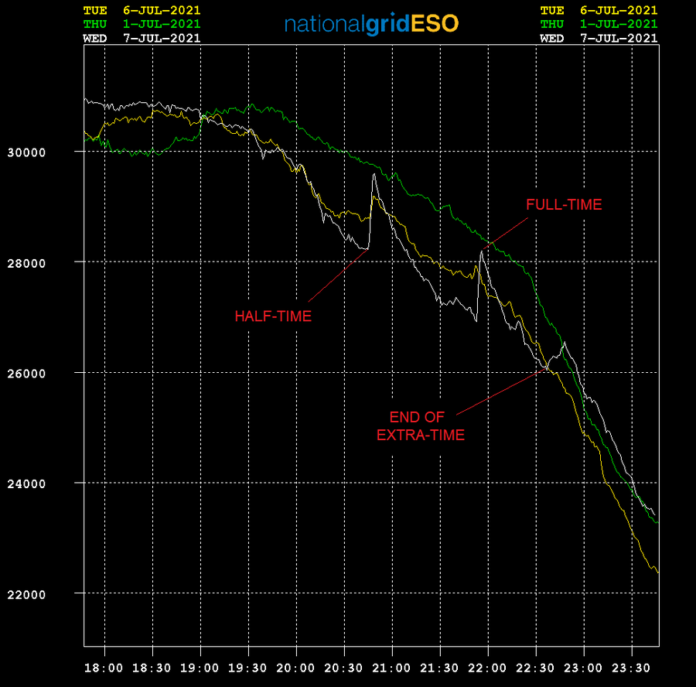 While football is on the brink of coming home, it is also producing record-breaking surges in electricity demand.

As the nation collectively sat down to watch England’s Euro 2020 semi-final match-up with Denmark on Wednesday night, demand for power skyrocketed by 1400MW at half-time and 1300MW at the end of 90 minutes, making it one of the biggest TV moments in terms of electricity pick-up in modern times.

Forecasts prior to the match suggested pick-up in the region of 1200MW, with millions of litres of water (via pumped storage) standing ready at Dinorwig, ready to be deployed in order for people to make their half-time cup of tea. And according to the grid’s control centre, ITV ad breaks only served to fuel movement at half-time.

Wednesday night’s pick-up was the same as the 2018 World Cup semi-final against Croatia (also 1400MW), but on this occasion Gareth Southgate’s side went one step further.

The Three Lions’ quarter-final thrashing of Ukraine registered a 960MW pick-up at half-time, which was good enough for 22nd in our rankings – the equivalent of 190 million light bulbs, or 530,000 kettles. Demand waned as the result became clear, with 450MW required at full-time with fans drifting off.

Prior to that, a 55-year wait for a win over Germany at a major tournament ended with a 2-0 win for England in their round of 16 tie, with the national control room confirming a 1GW pick-up at half-time and 1.6GW at full-time, surpassing the grid operator’s best guess of 900MW beforehand. That is the equivalent of 320 million light bulbs, or 888,000 simultaneously boiling kettles.

Geoff Hurst’s infamous hat-trick goal and the famous words “They think it’s all over…. It is now!” in England’s last major tournament win in 1966 – a 4-2 victory over West Germany at Wembley – accounted for a modest 600MW spike, while the regular Thursday night ‘Clap for Carers’ last year saw peak pick-up of 800MW.

Britain’s electricity system operator – National Grid ESO – is tasked with matching the country’s supply and demand, second-by-second, making sure the lights – and televisions – stay on!

In fact record viewing figures for the four-hours-and-five-minutes broadcast on ITV were recorded, and those, along with the electricity pick-up are set to be surpassed for Sunday’s showpiece final when England take on Italy at Wembley.