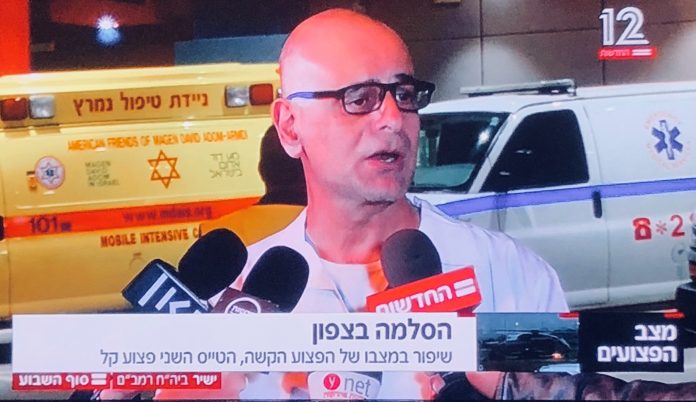 Israel was once again condemned by much of the main stream media over the weekend for over reacting to an unarmed UAV Iranian drone that flew into Israeli airspace on a reconnaissance flight on Saturday.

An Israeli attack helicopter received the go ahead to blow it out of the sky and soon after Israeli F-16 jets struck 12 Syrian targets including three aerial defence batteries and four Iranian sites that are part of Iran’s military establishment in the war-ravaged country.

However, an Israeli F-16 crashed during the mission, although the pilot managed to steer the jet back to Israeli territory before both of them ejected. Israeli police confirmed the aircraft crashed in the Jezreel Valley in northern Israel and video of the jet in flames was shown across the media.

Both Israeli pilots were injured when they bailed out, also landing in Israeli territory, but one was reported to be in serious condition, although he has since stabilised.  Syria says its surface to air defence system brought down the F-16.

George Deek, a diplomat with the Ministry for Foreign Affairs in Jerusalem tweeted that “While Iran fuels sectarian violence in Syria and the region, #Israel shows that inclusion is possible.” He included a picture of the Arab doctor named Dr Hani Bahouth who treated the two Israeli pilots.

The Jewish State’s air defences currently include the Iron Dome, designed to shoot down short-range rockets, the Arrow system, which intercepts ballistic missiles outside of the Earth’s atmosphere and the David’s Sling missile-defence system, which is designed to intercept tactical ballistic missiles, medium- to long-range rockets and cruise missiles fired from ranges of between 40 km to 300 km.

Israel also has Patriot missile batteries stationed in the North and has used them to intercept drones infiltrating into Israeli airspace from Syria.

In September, an Iranian-built unmanned aerial vehicle breached the “Bravo line” that marks the Syrian demilitarized zone and was intercepted by an Israeli Patriot anti-ballistic missile launched from a station near the northern city of Safed.

The Arrow system was first used in April when it was launched to intercept three surface-to-air missiles fired toward IAF jets by Syrian-regime air defence.

Last Saturday, the Iranian drone, took off from Syria’s T4 airbase in northern Homs province, flew through Jordanian territory and then infiltrated into Israel. It flew for about a minute and a half in the northern Jordan Valley before it was shot down in Israeli territory.

In retaliation for the incursion, eight jets took off to strike the drone’s launch site. During the operation, Syrian regime forces fired around 20 antiaircraft missiles at the jets. The pilot and navigator of one of the planes ejected themselves when they recognized that one of the missiles had locked onto their jet.

According to the IDF, Iran and the Quds Force of the Revolutionary Guards have been operating at the T4 base for some time, backed by Syrian-army forces and with the approval of the Syrian regime.

“Iran has been using the base in recent months for the purpose of transferring weaponry to be used against Israel,” said the IDF Spokesperson’s Unit.

A senior official in Israel’s defence establishment on Sunday warned that Iran is determined to entrench itself in Syria and will continue trying to attack Israel.

“As far as we are concerned, the event is over but the Iranians are determined to continue to establish themselves in Syria; the next incident is only a matter of time,” he said, warning that Israel does not rule out that the Islamic Republic will continue trying to attack Israel.

“We do not know what the mission of the Iranian drone was. It is their most advanced drone and they did not expect our radar to detect its penetration into our territory,” the senior official stated. “Our aerial freedom will not be harmed. We will continue to destroy targets.”