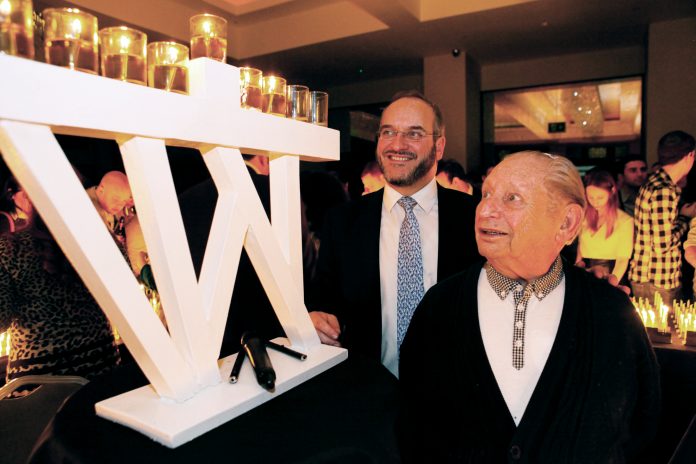 Holocaust-themed creative works that can inspire social change are being sought by the family of Buchenwald concentration camp survivor who died last month.
The family of Holocaust survivor Solly Irving received tributes from major Holocaust organisations recognising his work in educating and inspiring social change among tens of thousands of children during his lifetime.
Now the family have launched an annual creative works competition in his memory with education charity JRoots to continue Mr Irving’s legacy of social change. It will award prize money for the most powerful entries created by young people themed on a positive world, Jewish identity or Israel. Winners will be selected by an international panel.
Mr Irving’s family approached JRoots to run the initiative as part of their work taking 12,000 young Jewish people to concentration camps in Poland on Holocaust education trips. Participants of the trips, past, present and future, will now be invited to enter art, poetry, prose, music or photography to the competition.
Over 500 people attended a memorial service for Solly Irving at Hendon United Synagogue, run by JRoots, last Thursday (9.11.17), where the L’Chaim Survivors Challenge competition was announced.
At the ceremony Jonathan Marshall MBE, the former director of Plymouth Centre for Faiths and Cultural Diversity, paid homage to Mr Irving’s interfaith work with 20,000 of the city’s young people through his organisation. Rabbi Mordechai Ginsbury of Hendon United Synagogue, where Mr Irving was a member, told the packed venue that “his memory will serve as a source of blessing and inspiration, now and always.” Long-standing friend Sydney Wagner said Solly “fought his way out of those lowest moments, developed a wonderful family, stuck fast to his religion where a lesser man might have crumbled. He played the cards that life dealt him, to win.”
Mr Irving’s son-in-law, Jeremy Shebson said the family “are proud to have initiated a project with JRoots which will help strengthen young people’s connection to Judaism by communicating lessons for the future which they learn through Holocaust education programmes.”
JRoots executive director, Rabbi Naftali Schiff said: “As a person honoured to count Solly as a close friend I saw him dedicate his life to strengthening positive Jewish identity while creating a better world through his work inside and beyond our community. Everything we do at JRoots, is to inspire young people to visit the past, reflect on the present and use their talents and drive to transform the future. We believe the powerful lessons learned from Holocaust survivors like Solly can reconstruct our people’s darkest hour into a fountain of inspiration and blessing for the good of humanity. We are honoured to be playing a role in this endeavour.”