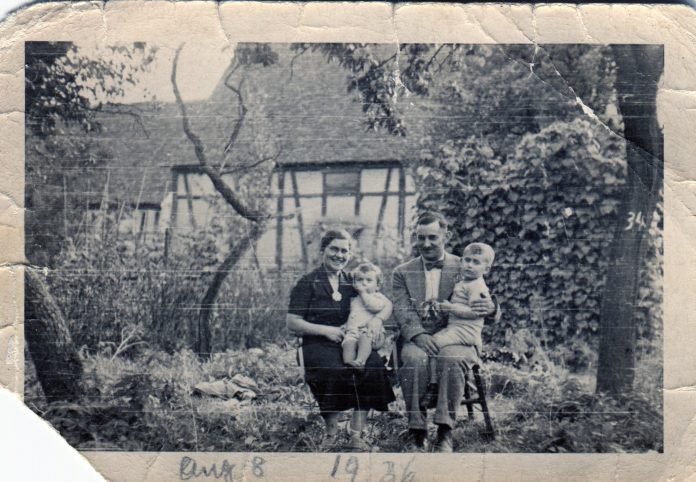 A group of young professionals from London joined Rabbi Moshe Mayerfeld and his family on an emotional and inspiring journey to Frankfurt last weekend. The purpose of the trip, organised by Aish UK, was to take part in a special commemorative stolperstein ceremony at the original home of the Mayerfeld family in Crumstadt, south-west of Frankfurt. Bernhard Mayerfeld, the father of Rabbi Moshe, was three years old in May 1938 when his family were forced by the Nazis to leave their home. The ceremony, at which six commemorative brass plaques were laid outside the original Mayerfeld family home, was attended by over 100 mainly non-Jewish members of the local community, including the Mayor of Crumstadt.
The Stolperstein (meaning “stumbling block”) art project was created by German artist Gunter Demnig in 1992 in order to commemorate individuals at their exact last place of residence before they fell victim to Nazi terror. As of January 2017 over 50,000 stolpersteine have been laid in 22 European countries, making the stolerpstein project the world’s largest decentralised memorial.
Rabbi Mayerfeld, in his emotional speech remarked, “I was inspired and in awe of the local community who are able to acknowledge the mistakes of the past and are committed to changing the future”.
Following the special ceremony on Friday, ten young professionals and seven members of Rabbi Mayerfeld’s family from London participated in a meaningful Shabbat experience in Frankfurt, who’s Jewish community today numbers 7,000. After joining 150 members of the community for a special Shabbat lunch, Rabbi and Rebbetzen Mayerfeld gave classes in the only remaining pre-World War Two synagogue in the city.
One of the trip participants, Natalie Faber, commented, “I’m really glad I went on the Aish Frankfurt trip. Not only was it a meaningful experience to explore my Judaism, but I had loads of fun and made great friends”.
The Mayerfeld Family, who later emigrated to the USA, today number nearly 1,000 descendants.
For further information please contact David Nielsen, Director of Development on dnielsen@aish.org.uk / 020 8457 4402.