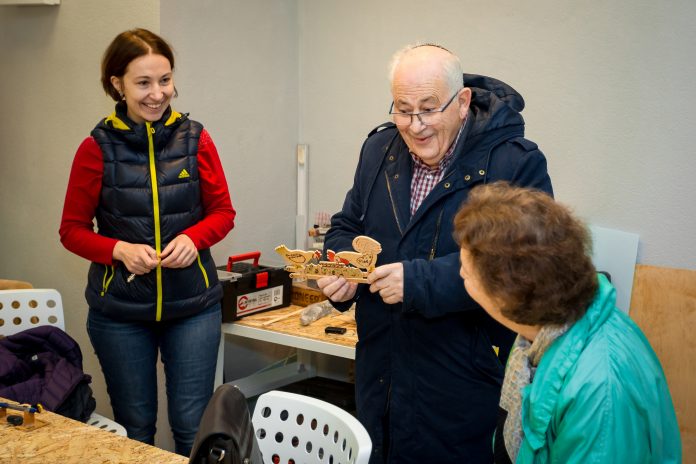 Members of Golders Green United Synagogue and their Rabbi have just returned from eastern Ukraine to visit a Jewish community which they have supported for more than 25 years. Rabbi Belovski and the seven congregants saw the progress the Zaporizhia synagogue has made with the support of the Golders Green community as well as the challenges facing the wider Jewish community. The trip was organised by World Jewish Relief which runs programmes to support the Jewish communities in eastern Ukraine, including in Zaporizhia and Dnipro.
Rabbi Ehrentreu, the Chief Rabbi of Zaporizhia, welcomed the group to the new Synagogue and took them to see the Jewish kindergarten and Jewish school which have been refurbished with the help of Golders Green United Synagogue. They also visited the Zaporizhia Holocaust memorial where more than 20,000 Jews were killed and buried in a mass grave on the outskirts of the city.
The trip participants got a chance to experience the poverty and deprivation of the city as well as the vibrancy of the Zaporizhia Jewish community. Visiting soviet era apartment blocks, they navigated dark and dilapidated stairwells to visit people in their own homes to hear how World Jewish Relief programmes are making a difference to their lives.
Pensioner Marianna told them how she would be left entirely alone were it not for the Home Care worker provided by World Jewish Relief who cooks, cleans and shops for her as well as providing vital companionship and conversation. In other flats and homes they saw how young people with disabilities are taught essential life skills and how older people are brought together in people’s homes to enable them to get out and socialise – a vital way to combat isolation and depression and keep them active.
The group also spent the morning at the Edison Space, a co-working hub established and supported with the help of World Jewish Relief, where Jewish community members who had been unemployed for many years described how they had received ‘back-to-work’ training and had been able to secure a new well-paid job or set up their own business. The Synagogue members went to visit some of these people in their places of work and saw how they had been able to expand and offer employment opportunities to other people in the community.
Rabbi Belovski said: “I last visited Zaporizhia twelve years ago and even though the buildings, roads and living conditions have remained the same, if not deteriorated further, the developments and achievements of the Jewish community are remarkable. It’s thanks to remarkable individuals like Rabbi Ehrentreu and organisations like World Jewish Relief, that people’s lives here are being transformed. But the biggest change has been the shift from giving to empowerment, moving people away from being needy recipients to taking responsibility and giving back.”
Participant and synagogue member Myrna Jacobs said: “On the one hand we were confronted with extreme issues of poverty and displacement. On the other hand we saw extraordinary examples of organisation and kindness which allowed human beings in acutely difficult circumstances to receive the type of intelligent assistance which allowed them to face life with courage and hope.”
Participant and Golders Green Synagogue Financial Representative Jonathan Davies said “I hadn’t appreciated the very severe levels of poverty. It is comforting to see the work done by World Jewish Relief to alleviate this.”
Rebecca Singer, communications officer at World Jewish Relief, led the Golders Green Synagogue trip to Zaporizhia and said, “It was great to be able to introduce a Jewish community from the UK to a Ukrainian one and for them to see and understand what life is like for so many people living there. The Golders Green Synagogue members were incredibly open and honest about the impact it had on their understanding of the struggles faced by Jewish communities in Eastern Europe. I look forward to taking other synagogue groups to experience this for themselves and would encourage any community who would be interested in a similar trip, to get in touch.”
If you or your community would like to join a future trip to Eastern Europe, please contact Rebecca Singer on rebecca@worldjewishrelief.org or 0208 736 1250.