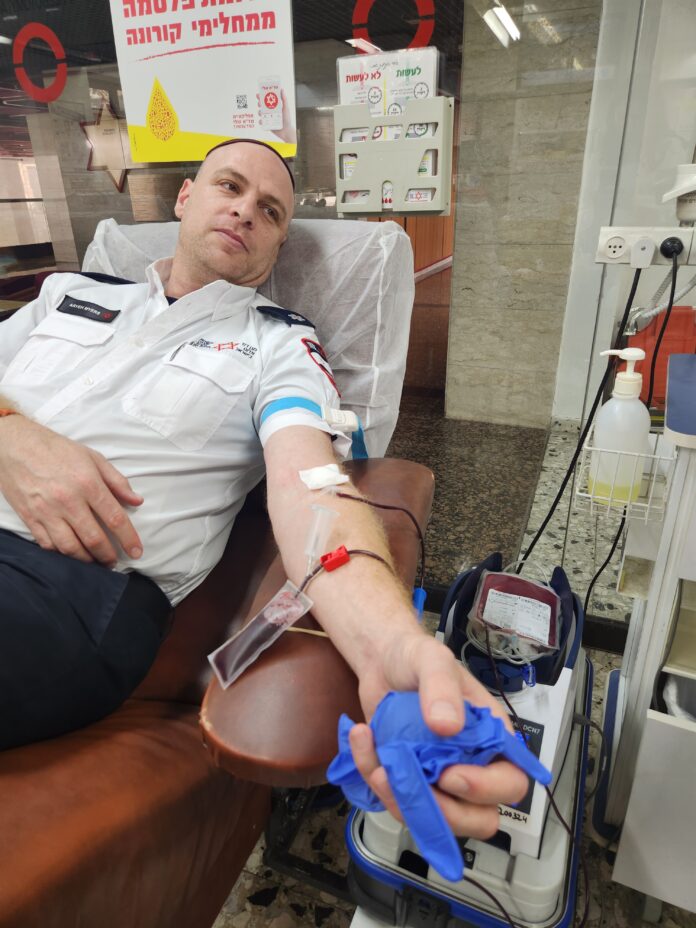 A change in guidelines concerning who can give blood in Israel has seen the first Brit give blood in the country for nearly 25 years.
Starting this week, those born in Britain or who resided there between 1980 – 1996 can once again give blood in Israel.
In December 1999, a Ministry of Health directive was issued that prevented all those who had lived in Britain for over 6 consecutive months from donating. The aim of this directive was to reduce transfer of a new variant of “Mad Cow Disease” (Bovine spongiform encephalopathy (BSE) / new variant Creutzfeldt Jacob disease – nvCJD), that was discovered in those who had received blood in those countries, following transfer from animals that were infected with the disease.
At the end of 2022, the FDA in America issued new recommendations to reduce the possibility of transfer of CJD of vCJD through blood or its components. These recommendations are based on new information that was prepared and published in Britain, and according to risk assessment models, the calculated risk of transfer of vCJD through plasma from blood donations, is one or two cases in every 50 years. This risk no longer justifies turning away blood donors in the same way as in the past. In addition, the risk to patients receiving immunoglobulin (IVIG) treatment is also negligible. Filtering the blood components in order to distance the white blood cells from the blood components increases the safety.
The first Brit to give blood was Magen David Adom Paramedic Aryeh Myers, formerly of Chigwell, Essex, who made Aliyah in 2012. Myers gave blood in Tel Hashomer Hospital, Tel Aviv on the morning of Monday 16th January.
Speaking afterwards he said, “Not being able to give blood in Israel always upset me. I saw my friends and colleagues giving and all I was able to do was look-on. To be given the privilege of giving blood and saving lives is incredible and I’m so proud to be the first.”
Prof. Eilat Shinar, MDA Deputy Director General of Blood Services greeted the change in policy: “For many years we’ve had to turn away those who made Aliya from these countries or had resided there for over 6 months. We’re pleased to tell all our loyal blood donors, who continued to approach us and asked us to change the regulations that this day has finally arrived! We will be pleased to meet these donors once again at MDA blood donation locations across Israel, in order to continue to fulfil the demands of the health service and the IDF, to provide blood units and components safely and at a high standard, to all those who require this treatment in order to save their lives.”
Magen David Adom UK, Chief Executive, Daniel Burger, commented, “It is wonderful news that British Olim can once again give blood in Israel. We at MDA UK have been lobbying our colleagues in Israel on this matter for many years as we know how much Brits in Israel long to support the MDA blood drive and save more lives.”
To mark the announcement the UK Ambassador to Israel, Neil Wigan, is planning a blood donation event for expats in conjunction with Magen David Adom UK early next month.
Neil Wigan, UK Ambassador to Israel, said: “I am very excited to hear this news and I have no doubt the British community in Israel feels the same. I would like to thank Magen David Adom and the Israeli Ministry of Health for making this important decision. I hope to be one of the first to donate blood and I encourage Brits in Israel to partake this meaningful opportunity to save lives.”