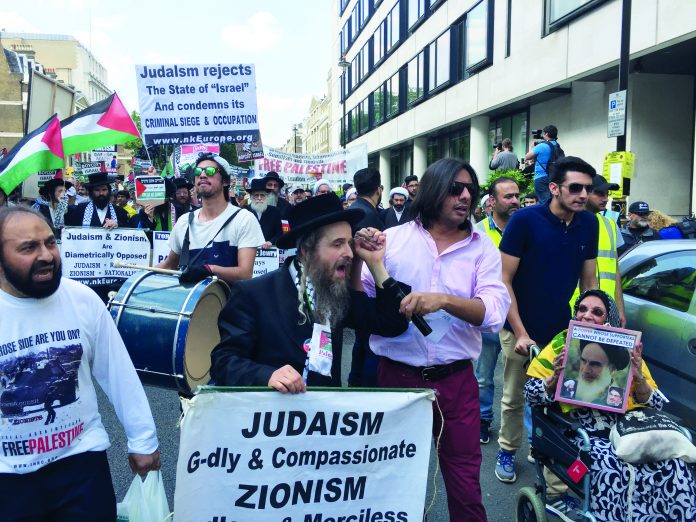 Home Secretary Amber Rudd who held onto her job this week after the Prime Minister reshuffled her cabinet, has attempted to reassure the Jewish community by saying she “understands” the concerns over the yellow Hezbollah flag being flown on the streets of Britain.

But at this time Ms Rudd is still not prepared to close the legal loophole that allows the flag to be flown at demonstrations in support of the terror group’s “political wing” and not the “military wing,” despite Hezbollah’s leader Hassan Nasrallah repeatedly saying they are the same organisation.

The military arm of Hezbollah was designated a terrorist organisation by the EU after overwhelming evidence showed the group was responsible for the murder of 5 Israelis and a bus driver in Bulgaria in 2012.

But the political row garners attention every year when the Al Quds Day rally is held in central London. Nazim Ali leads the annual march with a hand-held microphone shouting non-stop racist and anti-Semitic remarks including how the “Tory loving Zionists are responsible for the Grenfell Tower massacre.”

The Crown Prosecutions Service (CPS) declined to charge Ali under the “incitement to racism” criminal offence, first established in 1976 and updated in 1994. So, the Campaign Against Antisemitism have initiated their own private prosecution of Nazim Hussain Ali because he used abusive and threatening words and behaviour on 18th June 2017 on the streets of London.

Stephen Silverman who is the director of Campaign Against Antisemitism said a date has been set for the hearing but the case will likely go to trial and it is not clear if Ali will still insist on leading the march in the summer.

In addition, because Nazim Ali is the managing partner of a pharmacy, the CAA made a complaint to the General Pharmaceutical Council and submitted evidence to the Charity Commission about the “Islamic Human Rights Commission” that organises the Al Quds annual marches.

The police are able to stop protests going ahead if officers believe there is a risk of inciting violence or racial hatred.

Meanwhile, Mayor of London Sadiq Kahn has called for an outright ban on the Hezbollah flag while Hendon MP Mathew Offord said he wrote to the Home Secretary again asking her to re-consider her decision.

In the house this week, Oliver Dowden, MP for Hertsmere said, “Flying the flag of the political wing of the anti-Semitic terrorist organisation Hezbollah is provocative, incites extremism and is deeply offensive to our Jewish community, but the flag can still be seen flying at events such as the Al Quds day marches in London.”

In response, Ms Rudd said, “I am aware of, and very sympathetic to, the issues that my honourable friend has raised – I have discussed the matter with Assistant Commissioner Mark Rowley, and I know that the police are not ignoring it.”