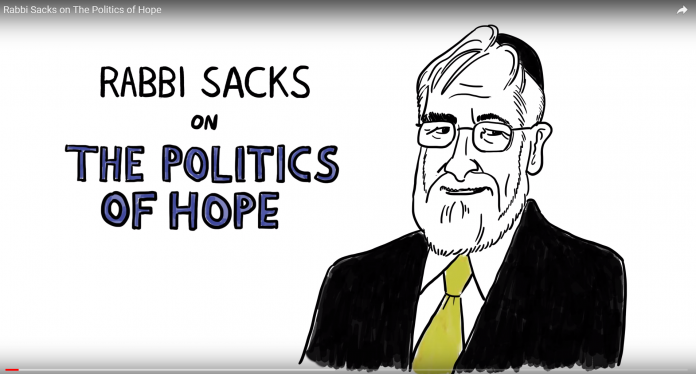 Former Chief Rabbi Lord Jonathan Sacks has launched a six-part whiteboard animation video series.
The first video – based on Lord Sacks’ book – ‘The Politics of Hope’ (published in 1997) was released on Tuesday via his website and various social media platforms.
In the video, Lord Sacks analyses the rise of the ‘politics of anger’ in the West today and explores whether it might be possible to create a different kind of politics.
A transcript of the video is available on Rabbi Sacks’ website.
“Too often in recent years, the West has been preoccupied with the idea of power as opposed to the power of ideas,” Rabbi Sacks said.
“Throughout my life, I have been excited and inspired by ideas and this is a challenge I have set myself and my team. How can we continue to present ideas, whether they are particular to Jews and Judaism or more universalistic in their appeal, in the most engaging and appealing ways?
“The whiteboard animation technique is one we have found to be a wonderful way of presenting concepts and ideas, particularly in an age of social media.
“I hope this series will highlight some of the ideas I have thought most deeply about over the past 30 years, and present them to a new and younger generation in a dynamic and inspiring way.”
Further videos will be released during the year focusing on key themes of Rabbi Sacks’ work over the past three decades.
Each connects to key challenges facing global society today.
Topics include the dignity of difference, integrated diversity, the relationship between religion and science, understanding and confronting religious violence, and ethics of responsibility.
The price of each video has yet to be set.
Each video includes subtitles in Chinese, English, French, German, Hebrew, Italian, Portuguese, Russian and Spanish.
The initiative follows on from the success of his videos on Jewish Identity, the Boycott, Divestment and Sanctions drive and the Mutation of Anti-Semitism.
Further details are available
at www.rabbisacks.org