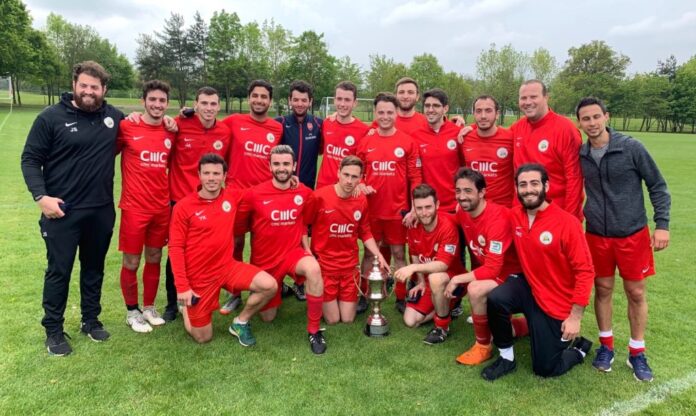 Hendon United Sports and HMH enjoyed a goal fiesta in the second round of the Peter Morrison Cup.

Yehuda Korman, Dovi Fehler, Moses Seitler and Avi Korman hit the target for Hendon in a 4-0 win against Real Madreidel.

“We were nowhere near our best after a few weeks off but did what we needed to do and are in the hat for the next round,” commented manager David Garbacz.

Manager Avi Goldberg was delighted his side had bounced back from a shock cup defeat to NWL Azurri in the Cyril Anekstein Cup last time out.

“Normal service was resumed but in a frustrating first half we hit the woodwork three times,” he said. “However, we found our shooting boots in the second half and filled them seven times without reply. Moss and Bull scored beauties.”

Division One Azzurri proved too strong for Brady FC by hitting six goals without reply in a stellar display.

Club de Chigwell enjoyed a 6-3 win in a nine-goal thriller against Hapoel Hampstead.

Geez Park Rangers ran out 8-0 victors against Qarabagel in the sole Cyril Anekstein Cup round one clash.

The result was not in doubt as the Division Two pacesetters led 6-0 at half time. Mikey Perkins and Joe Leslie bagged a hat-trick. Jamie Cohen and Jordan Grundman also scored in a runaway triumph.

“It was great to get back to winning ways after a long break,” noted Leslie. “A great performance

and attitude from the boys.”

In the Premier League Oakwood edged a close match against Maccabi London FC with a Charlie Kasler penalty.

The O’s are second in the league seven points behind Hendon who have two matches in hand and are favourites to win the title.

In Division One, Stoke Salmon eased to a 5-0 win against Hampstead Ducks to stay seven points ahead of Borussia Jewdinese.

Mill Hill Dons cut the deficit on Borussia to three points after a fine 5-1 away win at Scrabble. Dons though have played three more games so it will be a tough ask to catch second placed Borussia.