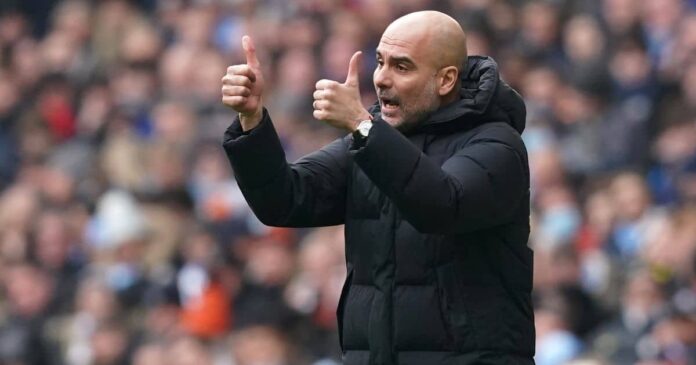 Premier League pacesetters Manchester City moved closer to the title with a 1-0 win against Chelsea.

Pep Guardiola’s side are 11 points clear of Liverpool, who have a match in hand, and Thomas Tuchel’s pretenders to the crown. Both Liverpool and Chelsea will keep battling away but only a catastrophic dip in form will change the destination of the title.

Chelsea played their part in a tight game before De Bruyne produced a moment of magic. The league might be out of reach this time around but the defending Champions League winners are in three cup competitions and will know their EFL Cup final opponents tonight after Liverpool play Arsenal.

Guardiola told BT Sport: “(We) absolutely deserved it. They defended well, they waited for transition to punish us and we won from one transition.” Tuchel felt his team deserved a draw.

Liverpool eased to a 3-0 win against Brentford at Anfield.

Fabinho opened the scoring with a header just before half time. Alex Oxlade-Chamberlain doubled the lead then substitute Takumi Minamino slotted home a third goal. Reds boss Jurgen Klopp vowed to “go for everything” but knows the cups are where silverware success is more likely.

Leeds United moved clear of the relegation zone and opened up the battle for a top four spot with a sensational 3-2 win against West Ham United at London Stadium.

Jack Harrison scored his first career hat-trick as injury ravaged Leeds earned a surprising but crucial victory to move nine points clear of the bottom three. A third successive league win against struggling Newcastle United this weekend will take them into mid-table security.

Harrison opened the scoring on 10 minutes only for Jarrod Bowen to level from a corner. But Leeds refused to buckle and took a 2-1 interval lead through Harrison. Pablo Fornals levelled after the break before Harrison chipped chip home the winner on the hour to settle a pulsating game.

Manchester United wasted a chance to move closer to West Ham by letting a two-goal lead slip against Aston Villa at Villa Park.

Bruno Fernandes scored early on then struck again on 67 minutes but Villa hit back with late goals from Jacob Ramsey and debutante Philippe Coutinho for a share of the spoils.

Villa boss Steven Gerrard told BBC MOTD: “We conceded against the run of play but didn’t feel sorry for ourselves, we continued to show character and believe.”

Wolves are on the edge of European spots after winning 3-1 against Southampton at Molineux.

Brighton scored late on against Crystal Palace in a 1-1 draw at the Amex Stadium.

Palace keeper Jack Butland saved a first half penalty from Pascal Gross and the Eagles looked set to win when Conor Gallagher struck in the 69th minute before a Joachim Andersen own goal.

In the battle to avoid the drop, just four points separate Watford, Norwich City, Newcastle United and Burnley, who have games in hand, at the foot of the table.

Watford scored late on against Newcastle at St James Park to deny the hosts.

Eddie Howe’s side led though an Allan Saint-Maximin’s second-half strike. But as Newcaslte sat back

Josh King and Joao Pedro went close for Claudio Ranieri’s side before Pedro headed home for a massive point.

Newcastle boss Eddie Howe could not hide his disappointment at full time. “We were within touching distance of a really important win,” he told BBC Sport.

Norwich secured a vital 2-1 win against Everton who sacked manager Rafael Benitez after this loss at Carrow Road.

The Canaries led 2-0 on 18 minutes after a Michael Keane own goal and Adam Idah effort. Everton substitute Richarlison scored a superb overhead kick after the break but Norwich saw the game out.

Benitez told BBC Sport: “Everyone came here expecting us to win and we couldn’t.”

Everton are six points clear of the relegation spots but this was a terrible loss and the owners decided to act.