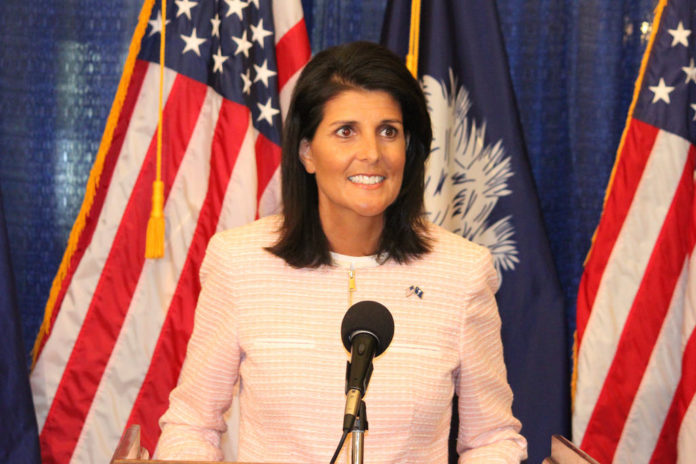 Nikki Haley has resigned as the US ambassador to the United Nations.  She will be relinquishing her position in January.  The president and Haley were effusive in their praise of one another in order to stress that Haley was not leaving her job on bad terms.

When questioned as to who would succeed the outgoing envoy, Trump said that there were several people who would take great pleasure in taking over the role.  He added that Haley had made it “a more glamorous position”.

Early rumours that the president’s daughter, Ivanka Trump, might be Haley’s successor, were rebuffed by Ms Trump in a tweet in which she stated that she would not be accepting the job.

Trump informed reporters that he had a shortlist of five potential nominees for the role.  However, the only potential candidate that he mentioned by name was his former deputy national security adviser, Dina Powell.

Trump said that Haley had told him of her decision to quit six months ago. However, many have expressed surprise at the timing of the announcement seeing as it is prior to the midterm elections.

Although speculation is rife that the motive for her departure lies in the fact that she intends to compete against Trump for the presidency, Haley has staunchly denied this.  Her resignation letter was dated 3 October, the day after Trump publicly derided Dr Ford, a woman who had issued damning allegations against Trump’s supreme court nominee.  This prompted some to wonder if Haley, an avid defender of women’s rights, had resigned in protest of Trump’s behaviour, although there is no evidence to support this theory.

Formerly a governor of South Carolina, Haley has been one of Trump’s most prominent deputies.  Despite Trump’s reluctance to condemn the Russian Kremlin, Haley has been a brazen critic of Russian policy in Syria and the Ukraine. She was also openly disparaging of the chemical weapon attack against a former Russian spy in the UK in March.

In April, she was mortified when the White House declared that “momentary confusion” had caused her to announce that sanctions were to be imposed on Russia.  Frostily, she retorted, “With all due respect, I don’t get confused.”

She was a proud defender of human rights and displayed unconditional support for Israel. The Israeli army even tweeted a message to her to thank her for her “service”.  She will be sorely missed by Jews around the world.