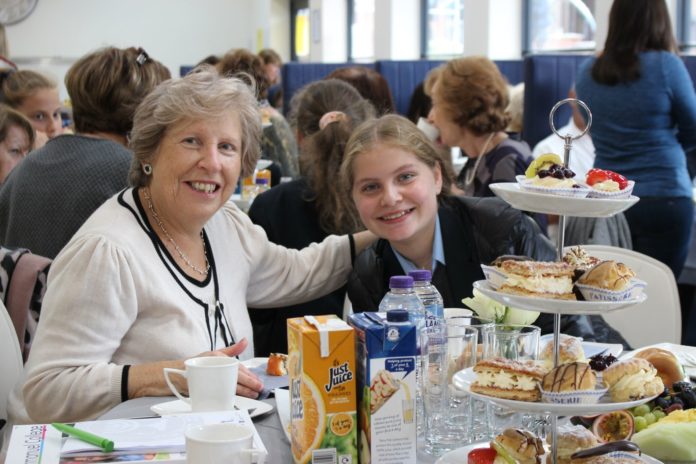 On Monday 8th October, Immanuel College held its first ever VIP Afternoon. The grandparents, uncles and aunts of pupils in Year 8 and 9 were invited to visit the College, with the pupils then acting as tour guides as they showed their guests around the extensive campus. They went into lessons, watched sport on the playing fields, visited the new Library, Science Laboratories, Art Studios and Computing Suites, enjoyed seeing the Beit – the synagogue where much formal and informal Jewish education takes place – and most of all saw a school operating as normal! For many of the grandparents, aunts and uncles  this was the first time they had actually seen the school in action. Some had been to see a play or a concert, but few had actually seen the wide range of facilities and activities at the College.

After their tours, the VIPs were given a lavish afternoon cream tea in the recently refurbished Dining Room before being addressed by the Head Master, Gary Griffin, who joined the College in September 2017. He began by making comparisons between the experience of education in the 1960s, 70s and 80s, when many of the audience had been at school, and the current day. He spoke of changes to the curriculum, examination system, technology and teaching methods, as well as the new challenges facing the modern teacher and pupil. He introduced the audience to concepts such as SEND, PSHE, Counselling, UCAS, mental health issues facing pupils, enrichment programmes and pastoral care. He ended by talking about the College’s wide-ranging Strategic Plan for the next five years.

After the Head Master’s presentation, Lynda Dullop, the College’s Admissions and Operations Director, spoke passionately about the College’s history and just as importantly its bright future. She outlined some of the new building projects and initiatives that are envisaged for the next few years and explained how delighted she was to see so many happy and proud grandparents, aunts and uncles attending this inaugural event. This was a poignant moment given that all three of Lynda’s children had been educated at and thrived at the College, that one daughter now taught at the College and that Lynda had herself recently become a grandparent!

The afternoon’s proceedings were rounded off by some students providing superb entertainment by singing to the large, enthusiastic audience. The last song, Fly me to the Moon, was very much suited to the age group present and was suitably optimistic and upbeat.

Feedback from those attending the event has been universally full of praise, gratitude and admiration. The children, as well as their grandparents, uncles and aunts, had a great time and Mr Griffin said that he intended to repeat the project again soon. “I think it will become a regular fixture in the College’s calendar”, he said. “It was a pleasure to see some of the older generation enjoying their time here and for them to feel part of the Immanuel community”.