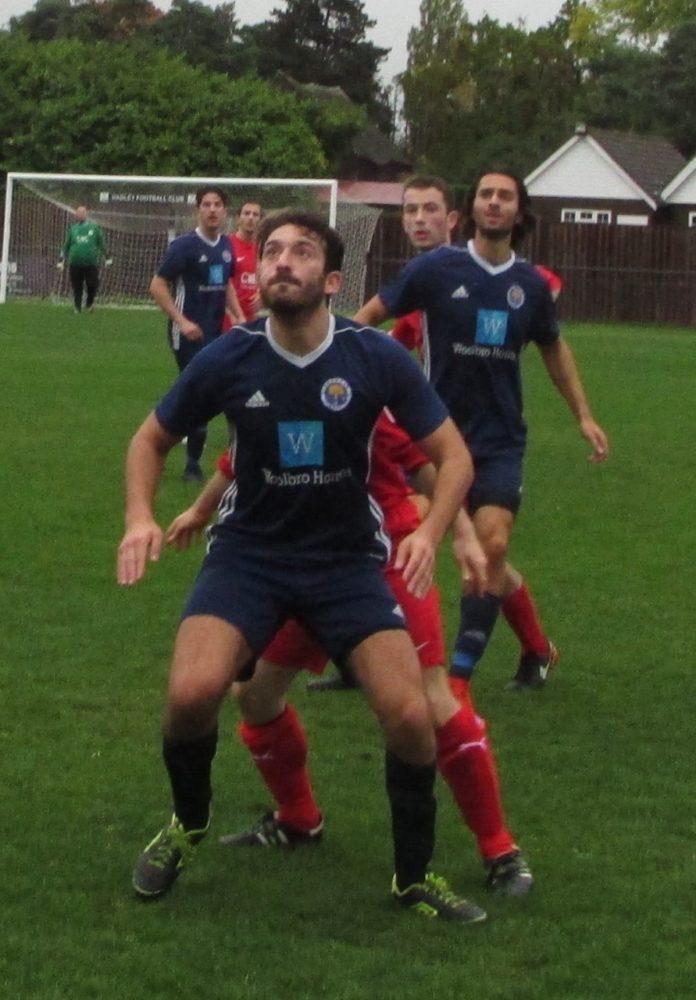 Jonny Kay fired home a drive from a Chaim Korman corner to open the scoring early in the second half.

Shortly after Korman won a penalty that Avi Korman dispatched.

Hendon’s Rocky Spitzer struck the crossbar from 35 yards but the points were already in the bag.
“I asked the boys to step up today and to a man, every one of them did,” said Hendon boss Jordan Sapler.
“The first half was a close, tight affair with both defences cancelling each other out.
“We spoke about improving our play in the final third at half time and ended the game superbly.

“Oakwood did not have a shot on goal, or notable chance, which shows how well we played.
“The boys are rightfully delighted with their performance.”

“A very disappointing result after dominating the first half when we were first to the ball and won most of our battles with the only thing missing being our cutting edge,” said Oakwood manager, Daniel Kristall.
“But goals change games and we conceded a poor one from a corner.  From then on, our reaction wasn’t good enough although the conditions were always going to make it difficult to battle back in.”

He added, “It’s a marathon and not a sprint.

“We play Hendon twice more times in the league.  Everyone is beating everyone.

“We also have three cup competitions so there is lots to play for and I expect us to perform better than we did in the final half an hour against Hendon.”

HMH opened the scoring fortuitously when a long drop kick from their keeper ricocheted off a metal wire above the pitch for George Goldberg to slot home on 16 minutes.

HMH’s rugged determination was met by resilient Camden defence before the hosts levelled midway through the second half when Mike Khalastchi headed a Kane Gilbery corner across goal for Gav Krieger to finish from close range.

Oli Sade scored the winner on 80 minutes with a superb solo goal.

Picking up the ball on the edge of his box, Sade turned his opponent and beat four players before slotting into the bottom left hand corner from a tight angle.

Camden boss, Stirling Kay, commented: ‘This is a team with a never-say-die attitude.

“We were unlucky to go behind to a freak goal, but the boys rallied, got stuck in and ground out a result we deserved.

“Although we are playing great football and getting good results we can find an extra gear and will be working on that in training.

“It was a well fought game and we look forward to battling HMH come the end of the season.”

“Credit to Stirling’s team – they came out the blocks fast and aggressive and it took us a long time to find our game,” said Avi Goldberg.

“We were poor in the first half but went 1-0 up against the run of play.

“Eventually we did find our game and started to play our football, particularly in the first half of the second half where we were unplayable.

“They could not get out of their half but we didn’t turn that dominance into goals.
“Credit to them as they hung in, equalised from a corner and then grabbed the winner.”
Redbridge Jewish Care A stay top of Division One after a 1-1 draw against Oakwood B.

Lolu Hibbert equalised for the visitors.

Oakwood manager, Jason Stein, was pleased with his team.

“A point in Essex is never to be sniffed at, but we left goals out there and should have won,” he said.

“In the first half we played some fantastic football, created chances and should have taken a few.

“I think Redbridge were surprised by our football, we showcased different skills in the second half, displaying resiliency and toughness we are not known for, especially coming from behind so quickly.

“We tightened up at the back after Redbridge had a lot of long ball and counter-attacking threat and ultimately saw the game out.”

Harrison Grant struck a fifth goal for the victors who were 3-2 behind before picking up the win.

“We were far from our best today, but sheer character and heart earned us another deserved victory,” commented Fairlop boss, Jake Sanders.

“Some poor defending on set pieces allowed our opponents back into the game, but the second-half was much better and from the moment we levelled at 3-3 there was only going to be one winner.
“Top scorer and talisman, Jaconelli, showed everyone why he is so crucial to us.   When chances came his way, the outcome was inevitable.
“A special mention also to Bradley Porter who was starting his first game since May and looked like he’d never been away. He was a rock from start to finish.”

North London Galaxy enjoyed a comfortable 9-0 win at struggling Scrabble B who are still searching for a first point of the season.

“Galaxy are a young, good footballing side who are without doubt heading for the Premier Division – if not this season then next.

“We held them for 30 minutes and went in 2-0 down at half time but their second-half display was awesome. They whipped the ball round quickly, didn’t hoof it and played some brilliant stuff.”
“But I can’t fault our team for effort.   All the boys gave 100 per cent but once the third goal went in, we had tired legs out there and when you are in our position, confidence drains away.
“It’s hard to pick players up after a bad run of losses but we will be back again against Jewdinese on Sunday.”

Jewdinese claimed a first win of the season with a Zack Collins brace and James Ross strike accounting for Los Camden B.

Division Two leaders Faithfold B went down to a first defeat of the season at Redbridge Jewish Care B who secured the win with an early Steve Summer goal.

“We were up against it when we went a goal down inside five minutes,” said Faithfold manager, Doron Shooter.

SPEC would have gone level alongside Faithfold with a home victory against Mill Hill Dons but had to settle for a point.

Jordan Stein opened the scoring for the visitors before Mark Leader levelled with a late strike.

“We were lucky to only be a goal down at half time but put in a much better second-half performance and deserved our equaliser,” said SPEC player-manager, Ricky Lawrence.

“Dons played some good stuff. They could have been out of sight but after we equalised, the game could have gone either way.”
“We were very unlucky today not to get the three points.  There were really good performances throughout the team,” said manager Dons Brandon Hamme.

“Our attitude and commitment were class.  We needed to finish our chances.  It wasn’t to be but we can hold our heads high.

“We played some of the best football I’ve seen us play in spells.  Our passing in the middle of the park was the best this season and we defended set pieces extremely well.

“It was gutting we didn’t get the result our performance deserved but credit to SPEC – especially their keeper, Josh Frey, who had a superb game.”

“The last two weeks we have turned the corner – credit to the squad.”

Faithfold C led through an Avi Garson strike before Neil Kochrane equalised for Scrabble B in a 1-1 draw.

The match between Hertswood Vale and North London Raiders Masters was postponed.