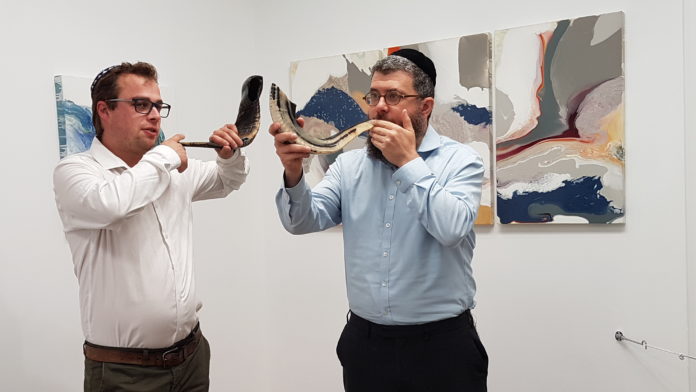 More than seven hundred people from across Hampstead Garden Suburb listened to the shofar from their own home as the Shofar on the Block initiative provided street shofar blowings on Rosh Hashanah.

As Covid-19 restrictions meant that Garden Minyanim were banned in the area shortly before the festival, and with limits on synagogue spaces, Chabad HGS in partnership with Norrice Lea Synagogue rose to the challenge and organised a series of shofar blowings on people’s driveways and streets throughout the second day of Rosh Hashanah. Thirty-five locations were chosen by project coordinator Yitzi Sidelsky across the Suburb, to cover most of the area. Residents who ranged from very young babies through to those in their nineties, were able to join in a socially distanced way from their homes, standing in small groups on the street or even their balconies.

Rabbi Bentzi Sudak, said: “The shofar is one of the most important elements of Rosh Hashanah and it was vital that we rose to the challenge and ensured that everyone who wanted to hear the shofar was able to within the guidelines. It was emotional and moving to see so many people, young and old, religious and not affiliated, have the opportunity to listen to the shofar, whether from the comfort of their own home or in family groups on their street. This year’s Rosh Hashanah will have a lasting impact on me and everyone who was present.”

Local Resident, Annabelle Sheldon said: “As we walked around the Suburb on second day Rosh Hashana, everywhere we went we could hear the beautiful sound of the shofar being blown. It was the most wonderful, uplifting and special experience and we thank Rabbi Sudak and his team for the incredible achievement of making sure that everybody heard the shofar this Rosh Hashana!”

Simon Pollock, one of the many volunteer shofar blowers said “It was both funny and emotive when one heard neighbours, who you couldn’t see, saying “shkoach” and applauding. Some were very elderly and it was good to reach them. The whole experience was enjoyable and rewarding.”