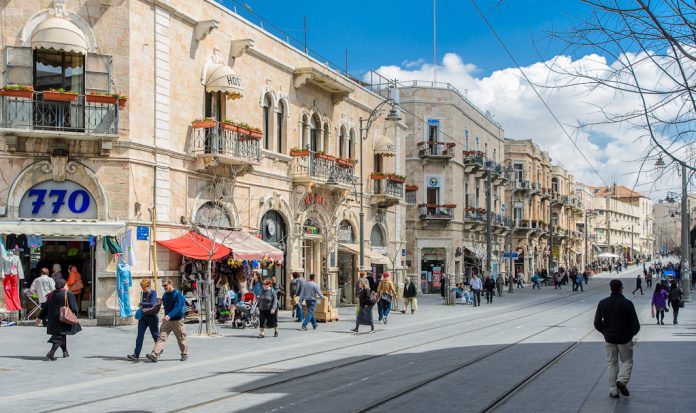 My phone pings just as I leave work. It’s a message on our ‘Girls’ WhatsApp group.

“Ladies, exactly one week to go, I can’t quite believe it. One week until I am Mrs Silverman, and I can’t wait to share it with you all….” The message ended with a whole line of emojis which included champagne bottles, cakes, smiley faces and about a thousand hearts. Bless Shoshana, she was so excited.

“Can’t wait either, Shoshi Woshi Woo Woo,” Talya replies on the group, also adding some emojis. Seriously, how did people punctuate before emojis?

When Shoshana had said she wanted to get married somewhere hot, then chosen Israel in July, I didn’t know she had meant THAT hot. But as a teacher she had to work it around school holidays, so they had not had much choice. Talya, Jena and I had replied immediately that we would come. The three of us had decided to stay on for a week after the wedding to see some of the country. Jena had taken it upon herself to be chief organiser. At first Talya and I were happy for her to do it, but when she started sending texts or WhatsApp messages with helpful reminders like “Don’t forget to buy suncream” and “Remember to bring a charger,” it started to get a bit much!

When she had sent an email entitled Holiday Plans v5, and I opened up a colour-coordinated spreadsheet complete with pictures and links, I didn’t know if I was more shocked by the amount of effort she had put into it or by the fact that she had made four other versions before she had decided to send it. I know that Jena worked with children for a living, but we were not 3-year-olds in her nursery class. We were grown women, and I was sure we could manage a week in Israel without too much drama.

Talya had lived in Israel for a year and knew some cool places to visit that were a bit less touristy. She also travelled a lot for her high-powered, high-stress job, so I am sure she would remember to pack her toothbrush without Jena’s little reminders. I myself had managed to get around Australia without getting into too many scrapes — although doing a bungee jump over a river could have ended badly if the elastic had snapped, but thankfully I got back in one piece. Jena was not as adventurous, and truth be told she was a bit of a worrier, which might explain why she wanted to plan everything so carefully. The thing she was particularly worried about at the moment was that she had been married for over a year and had so far not managed to get pregnant. Despite having all the tests and the results all being fine, Jena had confided in us a few months ago that she was really worried about it. Working with children every day made it even more difficult, and it was getting her down. I wasn’t at that stage yet; it was difficult enough for me to meet anyone suitable in the first place….

The phone pings again. “Wooo hoooo Shoshi.” That was Jena. She was not big on emojis so she had added just a few kisses.

I couldn’t believe that Shoshi’s wedding was only a week away. She had been dreaming of this moment since we were young. Even when we were at primary school, on Purim she would always come as a princess or a bride or sometimes a princess bride, complete with tiara and some plastic clip-on earrings. She was so cute, and she and Rafi were pretty sweet together too. They had known each other their whole lives. Rafi was a friend of Shoshi’s older brother Joseph, and they had been more like brothers throughout school. Like naughty brothers really. Always joking around, playing the class clowns, and doing funny impressions in the playground at lunchtime. Shoshi had always thought that Rafi was very funny and used to cry with laughter when he used to come to their house for dinner, which was a lot of the time. Shoshana’s mother used to joke that she may as well just adopt Rafi as he was at their house so much. I guess marrying Shoshana was almost the same and made sure that he was definitely going to stay part of the family.

On my way home from work, I popped in to a shop to buy one of those little fans that would help keep me cool in the Israeli summer. There were some really pretty sun hats as well, so I tried one on and was surprised that it fit. I always really struggle to find hats that fit me — I think I have an odd-shaped head. It’s not obviously odd, not like a cone head or anything like that, but for some reason hats never really seem to sit properly on my head. As I leave the shop with my new purchases, I get a text from Shosh.

“Michelle, everything seems to be going wrong. This is all too difficult, maybe it’s a sign.”
Shosh has already been in Israel for the last few weeks, organising the final bits for the wedding. I wouldn’t say that she has become Bridezilla — not to her face anyway as she might have a go at me — but she is a bit of a micro-manager. She couldn’t leave anything to chance and had been checking in every day with the caterer, the florist, and even the rabbi to make sure that everything is all ok. She just wants everything to be perfect and has been keeping us updated via WhatsApp on all the little things that had to be sorted out by her — mainly because she doesn’t really trust that anyone else will do them to her standard. She has a meltdown like this at least once a day, so it is a bit difficult to take it too seriously, but as her friend I want her to know that I care.

“Shosh, please don’t worry. Have a break, relax and I’ll call you when I get home….”
I had not actually gone away on holiday for a while, and I was really looking forward to the chance to relax and have some fun with my close friends. Work had been a bit stressful of late with lots of people being made redundant, and it had made everyone a little more on edge than usual. Even though I had been told that my job was safe, some other people on my team had not been so lucky, and it was all just really unfair.

By the time I got home, Shosh had texted me to say that she had sorted out the problem, had taken my advice and was even going to switch off her phone for an hour or so, so she would call me tomorrow. Crisis averted!

I spent the weekend trying to pack, which basically meant getting all my summer clothing out of the wardrobe and putting them all on the bed, trying them all on, realising that some of them actually fitted, and putting the rest back into my cupboards in the hope that one day I could wear them again. Unfortunately, I still had more clothes than room in my case, but I would get there.

Talya had texted me on Sunday asking, “How many pairs of shoes are you taking?” I replied, “Not sure, but probably three.” “Are you taking your straighteners?” “Yes for sure.” Not because I am one of those girls who HAS to have her straighteners, but more because of the humidity; if I didn’t use straighteners I would end up looking like a deranged poodle, and that is definitely not a good look!

By Tuesday evening, I had finally finished packing, which was good as our flight was the next morning. The taxi would be picking me up at a stupidly early hour the next morning. Before I zipped up my case, I had one last check to make sure I had not forgotten anything vital. Once I was satisfied I zipped my case and wheeled it to near the front door so I could grab it in the morning. I put all my documents together. Passport, check, boarding pass, check, copy of my insurance documents, check. Now for an early night….

A ping on my phone, and a message from Jena: “One more sleep…. Yay!” At last, it seemed like she was finally relaxing and getting into the holiday spirit. Then: “BTW, don’t forget to set your alarm for super early. Don’t want to miss the plane do we?!” I thought it was too good to be true. I must have spoken too soon, she just could not help herself!

I set my alarm and go to bed….