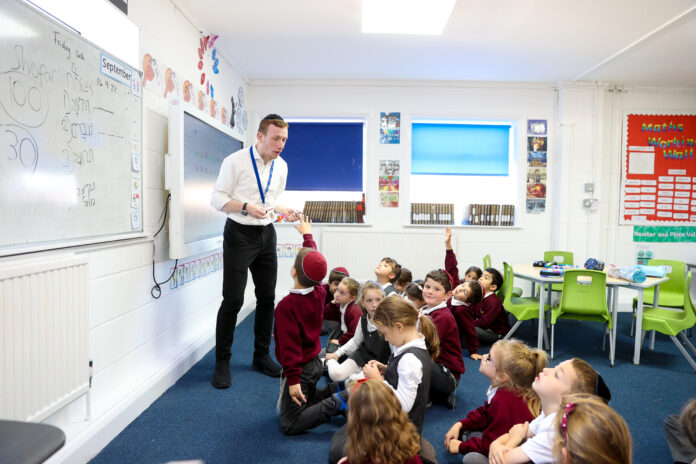 Hasmonean Primary School is delighted to have been judged as Good overall in its recent Pikuach report, with the school leadership noted as being Outstanding. The school was praised for its “warm and caring environment” which delivers “a holistic Jewish education… provided by a team of enthusiastic Kodesh teachers under the leadership of an outstanding Head of Kodesh.”

The leadership and management of the school were rated by Pikuach as Outstanding “because the SLT, including governors, have an acute knowledge and understanding of both the school’s strengths and areas requiring improvement.” Together with the school Principal, Rabbi Mordechai Ginsbury, the report highlights how “they articulate and communicate a strong commitment to high standards of work and to pupils’ Jewish spiritual development.”

The quality of Jewish education, which was rated as Good, was based on “a well-constructed and sequenced curriculum that provides Jewish knowledge and skills for future learning and communal involvement.” The “effective use of ICT” was also noted as contributing to pupils making “good progress in their Jewish education.” The Chumash lessons were particularly highlighted as a strength as “pupils participate in discussions about moral values that they can learn from Torah events and personalities.” Pupils were also praised for their “fluency, accuracy and confidence” in their Hebrew reading and their “detailed Jewish general knowledge and skills across the Jewish curriculum.”

In terms of the Jewish personal and spiritual development, which was rated as Good, Pikuach noted that pupils are “offered appropriate levels of challenge, insight and understanding of tefillah, tzedakah and religious activities” and that “the curriculum builds on pupil’s prior learning, progressive taking into account pupils’ intellectual, emotional and spiritual growth.” The report highlighted how “all pupils participate fully, and feel included, in the prayer life of the school” which “contributes enormously to the spiritual and moral development of the pupils.”

Answering the survey, responses from the parents were “overwhelmingly positive in all areas”, noting that “the Senior Leadership Team are very good” and that “It’s a very warm school and staff are so caring.” Hebrew reading and knowledge of the Parsha were also highlighted as strengths by parents.

Commenting on the report, Dan Sacker, Chair of Governors, remarked: “I am delighted that the report highlights both the significant progress that has been made since our last Pikuach inspection in January 2015 as well as the impressive steps that have been taken since the appointments of Rabbi Silkoff as Head of Kodesh in 2019 and Mrs Gross as Head Teacher in January 2022. I am confident that this outstanding leadership in both Kodesh and Chol will drive Hasmonean Primary School to continued success in the future.”

Rabbi Mark Silkoff, Head of Kodesh, commented that: “I am delighted that the significant work that has been done since the last Pikuach report, especially around curriculum development and the moral focus of our teaching, has been recognised by inspectors. I would like to praise and thank my staff for all their efforts to date and in the future as we continue to strive for all areas of Kodesh – and the school – to be outstanding.”