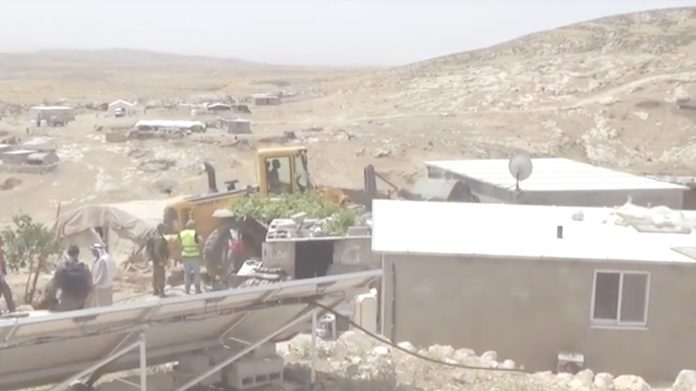 This is the third time in recent months the evacuation has been shelved, the latest following international pressure.

Police officers and soldiers were on high alert before the stand down potentially due to the visit of US President Donald Trump to the Middle East this weekend.

As tensions continue to simmer in the region one Palestinian died and five were wounded as they tried to enter Israel when an IDF booby trap exploded on the Gaza border.

Devices have been set to limit the increased crossings of the border fence.

“If anyone thinks we can carry on with this daily routine of kites and fires, he is mistaken,” he reportedly said.

In the biggest incident in recent weeks, no casualties were reported in Israel but damage was sustained.

The IDF said seven rockets were intercepted by the Iron Dome defence system.

“The Hamas terror organisation led a serious rocket offensive against the Israeli home front tonight and is leading the Gaza Strip and its residents to deterioration and escalation,” a statement noted.

“Hamas is responsible for everything going on in the Gaza Strip and will bear the consequences of the acts of terror against Israel’s citizens.

“The IDF is prepared and determined to fulfill its mission to defend Israel’s citizens and will increase its activity if necessary and following an assessment of the situation.”

The latest intervention followed jets striking nine Hamas targets including military bases in Jabalia, Al-Shati and a weapons facility in Gaza City in the early hours of Monday.

An IDF spokesman said strikes were in response to explosive balloons and kites launched into Israel.

“These are terror attacks that endanger the residents of southern Israel,” said a statement.

“The IDF warned and carried out several attacks near the cells responsible for the arsons and destruction of lands in Israel as well as infrastructure used by these cells.”

They added: “The IDF has intelligence information and the operational ability to further increase these strikes and they will grow in strength as required.

“The IDF is determined to continue acting with increasing force against these terror activities for as long as it takes and with a variety of tools, until they stop.

“The Hamas terror organisation is responsible for everything that happens in and from the Gaza Strip, and it will suffer the consequences.”

Firefighting services fought 17 fires in southern Israel on Sunday including three in the Kissufim Forest, a kibbutz and hundreds of turkeys suffocated due to smoke inhalation from the incident.

Over Shabbat firefighters put out more than 20 fires close to the Gaza strip.

The current heatwave made putting out the blazes hard for firefighters.

“Another long hard day fighting to contain and extinguish the fires in open areas and under intense heat has passed,” Gadi Yarkni, Head of the Eshkol Regional Council,” reportedly said.

“Our firefighters battle to prevent these fires from growing and engulfing towns and homes.”

The IDF has started to utilise drones to shoot down firebombs carried by balloons and kites.

Elsewhere in Israel, Shin Bet, IDF and Israel Police exposed a Hamas terror cell in the Nablus area planning attacks in cities including in Tel Aviv and Jerusalem.

The cell had been operating since last October last year.

Twenty terrorists, the majority affiliated to Hamas, had a long history of terror activities

“The exposure of this affair demonstrates, once again, the will and the effort that Hamas invests in terror infrastructure to promote serious terror attacks in Israel,” a Shin Bet official reportedly said.

“The exposure of the infrastructure teaches us about the continued desire by Hamas to carry out terror attacks against Israeli targets, while undermining the relative calm that has been taking effect in recent days.

“We will continue, together with our partners in the IDF and the Israel Police, to act with determination to preemptively thwart terror infrastructure and the murderous intentions of Hamas and to bring members of the infrastructure to account.”

Netanyahu also issued a statement, adding, “Hamas is trying to harm us both from Gaza and from Judea and Samaria. That is the reason that we will continue to maintain security control over the entire area west of the Jordan.”