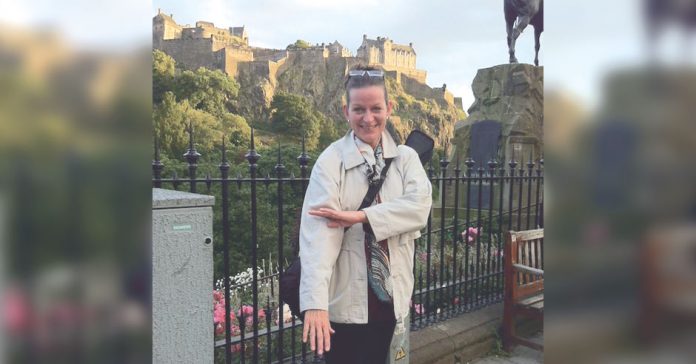 Chabloz received an indefinite restraining order against contacting two leaders of Campaign Against Antisemitism and is banned from social media for 12 months.

District Judge Zani, who found Chabloz guilty of criminal offences of the Communications Act 2003 at a hearing last month, ordered her to pay a £115 victim surcharge and costs of £600.

The landmark case delivers a precedent on incitement on social media and whether the law considers Holocaust denial to be “grossly offensive” and illegal when used as a means to hound Jews.

The Holocaust denier from Glossop in Derbyshire pleaded “not guilty” on charges relating to three self-penned songs decrying the Jewish conspiracy.

Two songs were performed at far-right London Forum meeting in London in September 2016 and uploaded to YouTube.

A third song was uploaded to YouTube in September 2017.

The court was read an impact statement from Stephen Silverman, Campaign Against Antisemitism Director of Investigations and Enforcement.

“Today, British Jews feel more beleaguered and exposed to danger than at any time in the last seventy-plus years,” he said.

“Alison Chabloz has been at the forefront of those who are responsible for that state of affairs.”

Reaction to the sentencing of Alison Chabloz has been swift.

“This sentence sends a strong message that in Britain Holocaust denial and antisemitic conspiracy theories will not be tolerated.

“Chabloz is a remorseless and repulsive anti-Semite who has spent years obsessively inciting others to hate Jews, principally by claiming that the Holocaust was a hoax perpetrated by Jews to defraud the world.

“District Judge Zani refused to make her a martyr, leaving her a pathetic and insignificant figure who now has to learn to muzzle her incitement or face immediate imprisonment. Time will tell whether she manages.”

In sentencing Ms Chabloz, District Judge Zani commented, “It appears to this court that no proper remorse is forthcoming from you.

“I don’t know whether you want to be a martyr to your cause. Only time will tell.

“This sentence will test your resolve. If you fail to abide by the terms of the suspended sentence you should expect to go to prison.”

In his remarks when finding Ms Chabloz guilty last month, he noted that the court was “entirely satisfied” material in each of the songs complained of was grossly offensive as judged by the standards of an open and multi-racial.

The defendant had failed by a considerable margin to persuade the court that her right to freedom of speech under the guise of her work as an artist provide her immunity from prosecution in relation to each of the songs.

Having assess the defendant’s evidence Judge Zani was satisfied Chabloz intended to insult those to whom the material related.

Having considered all evidence, the defendant was guilty of three charges.

Chabloz described herself as a Holocaust revisionist and her music as “satire”.

She noted Jewish people found her songs funny and no-one was forced to listen to them.

Offensive lyrics questioned whether the Holocaust happened, noting that the “so-called Holocaust” had “been used to sustain the criminal State of Israel”.

Chabloz described the Shoah as “a bunch of lies” and penned that Auschwitz was “a theme park just for fools” whilst the gas chambers were “a proven hoax.”

Under cross-examination, Chabloz contested six million Jews were murdered by the Nazis citing that it was “unlikely to be more than a million.”

Chabloz said sending schoolchildren to visit Auschwitz was “indoctrination” and Jews were disproportionately influential in Parliament.

Outside court, before and following the verdict, Jewish protestors clashed with Chabloz supporters before police arrived to clear the area.

The Crown Prosecution Service took over the case against Chabloz initiated by CAA in a private prosecution.

The verdict comes amidst a crisis of confidence in the Jewish community.

CPS prosecutes in the region of 15,000 hate crimes, but there has yet to be a year in which there have been more than two dozen known prosecutions of anti-Semitic hate crimes.

CAA research shows that more than half of British Jews feels the CPS does not do enough against anti-Semitic crime resulting in the organisation taking action against crime.

Only last month, neo-Nazi leader Jeremy Bedford-Turner received a 12-month prison terms after being unanimously convicted by a jury of incitement to racial hatred over a speech he gave in 2015 at a demonstration calling to protest against the “Jewification” of Golders Green.