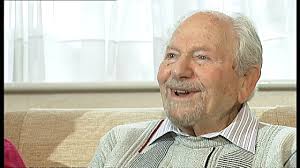 It is with great sadness that we learned of the passing of Hermann Hirschberger MBE, aged 93, a former Chair of the AJR – Kindertransport special interest group.

Among his other achievements, in 2007 Hermann devised and oversaw the creation and publication of a unique survey entitled “Making New Lives in Britain”, a database recording the Continental background, journey to Britain, reception and subsequent experiences and lives of some 1,450 Kinder, a strongly representative sample of the almost 10,000, predominantly Jewish children of the Kindertransport. This is now published in the form of a statistical database. https://ajr.org.uk/kindertransport-survey/

Hermann also successfully campaigned to enable Kinder to benefit from a British state pension although they had missed the opportunity to pay national insurance premiums.

Until poor health prevented him doing so, Hermann regularly spoke to school pupils about his experiences fleeing Karlsruhe, his town of birth in Germany, on a Kindertransport and was a regular attendee at our Kindertransport lunches.