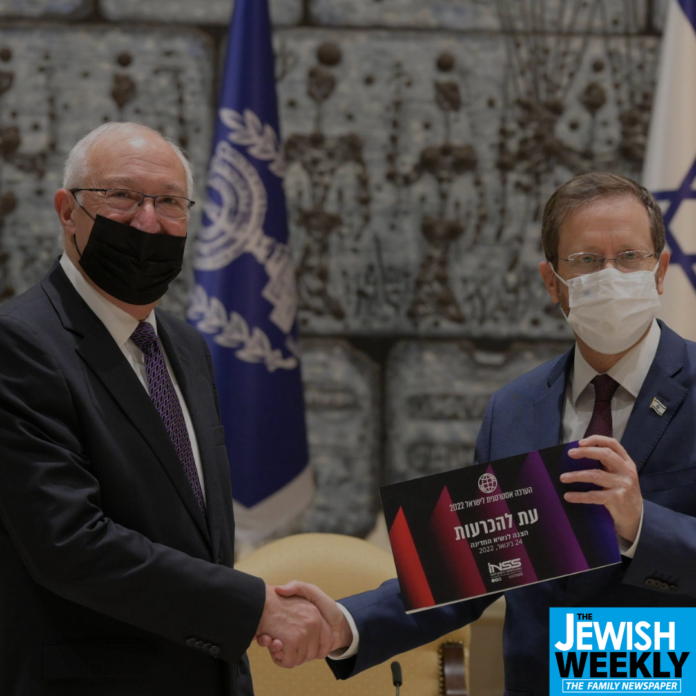 President Isaac Herzog has received the Strategic Survey for Israel 2022.

The Institute for National Security Studies report’s main findings were presented to the President by INSS director Manuel Trajtenberg and INSS senior fellows.

INSS scholars presented Herzog with the major security and diplomatic issues facing Israel in 2022, arising from the institute’s analysis. Among issues in the report was climate.

Following the presentation, Herzog said: “Your annual report identifies dangers and threats, but also points to opportunities and openings for hope.”

He added: “There is an emerging regional understanding that the future of the Middle East is a future of cooperation. In the face of the Iranian threat and its dangerous proxies in the region, we must cooperate with our friends. Not just for the sake of Israel’s citizens, but for all the inhabitants of the Middle East. This is a regional interest of the highest order.

“Israel’s security is tightly bound up with its national resilience, in our ability to deal with the most profound disagreements, without giving up on our faith in ourselves. We have the power to live together and act as one people. Bridging divides, including political ones, is perhaps the most important step for maintaining Israel’s security, stability, and prosperity.”

“The world is undergoing very dramatic changes,” he noted. “You are getting the nation’s leaders, public opinion and public opinion shapers to focus on core issues on which we must focus. And the past year proved just how much attention they require.”

The INSS report claimed that Iran is weeks away from achieving nuclear capability and developing military options to threaten Israel.

Proxies such as Hezbollah and Hamas would launch simultaneous attacks against Israel from different borders. Researchers identified major threats which include the Iranian nuclear program, Israel-Palestinian relations and internal divisions in Israeli society.