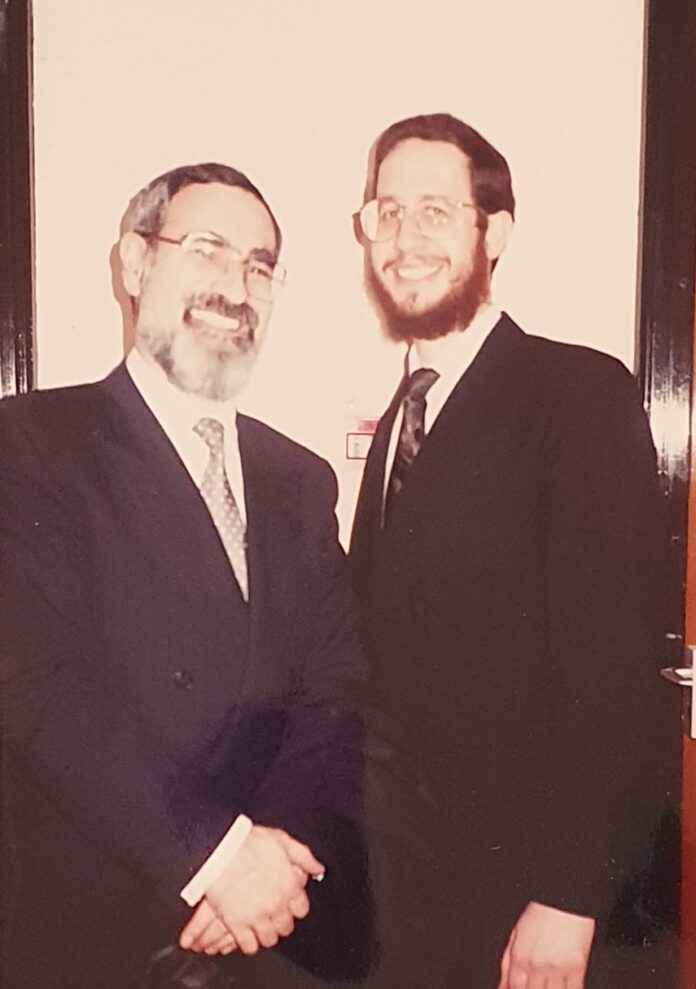 The impact Rabbi Lord Jonathan Sacks had on both the Jewish community and wider society is evident from the sheer volume of testaments and obituaries in the international press and social media.

I arrived in the UK a few months before he became Chief Rabbi and I had the privilege of being a Rabbi in the United Synagogue for the entire duration of his tenure. During that time I had countless opportunities to engage with him on a Rabbinic as well as personal level. He inducted me into office in 1991, in Richmond, and guided the early years of my role in the Rabbinate. When after a couple of years I looked to leave I sought his council. He suggested five years was an appropriate timeframe before moving on. Nevertheless, I tendered my resignation the next morning. He would have undoubtedly been perturbed at my neglecting his advice but he didn’t take it personal. Even as there was internal opposition to me, as a Chabad Rabbi, taking my next position in Mill Hill, he overruled. It is to his credit that I owe the past twenty-seven of flourishing together with the Mill Hill community. In one conversation he said to me, “We Rabbonim give so much time to our communities at the expense of our own family. Take time out to do lunch with your wife once a week. Make that your priority.” Rabbi Sacks was a Rabbi’s Rabbi, always truly caring and with a unique way of empowering the Rabbinate. True leaders are like the best conductors. They reach beyond the notes to touch the magic in the players.

He once encouraged me to go on a radio program to discuss religion. It was my first ever media experience. The sum total of my “media training” was when he called me just before stepping into the studio and offered me one line of advice: “You don’t have to always answer the question.” He was a master of the soundbite and there was always so much wisdom contained within brief sentences. This was always reflected in his carefully worded lectures and numerous books.

To be sure, his role as Chief Rabbi was going to be fraught with challenges, particularly because he was eyed with suspicion from the ultra-orthodox who found it difficult to relate to someone who had a modern Orthodox upbringing, was educated in non-Jewish schools and became a philosopher long before he became a Rabbi. This was the reality of his dichotomous character; Dr. Jonathan and Rabbi Sacks, as the media was wont to point out. It was this internal contrast that led to some controversies during his tenure. When Hugo Gryn, a holocaust survivor and leader in the reform movement in the UK, died, Rabbi Sacks was going to deliver a eulogy at a memorial event. This incited severe backlash from the ultra-Orthodox, prompting him to write a letter to the late Dayan Padwa, head of the Orthodox Union, insisting he was going to use the opportunity to criticise the reform. The letter was leaked and what became known as the “Gryn affair” ensued. He once confided in me that the rhetoric and backlash was so intense he had contemplated resigning.

Another instance was the publication of his book, “The Dignity of Difference,” published in 2002, in which there were certain lines that were perceived as anathema to traditional Judaism. “I’m a poet and I like using poetic license,” he told me in a phone conversation, explaining why his choice wording can sometimes be misconstrued. Faced with more criticism, he opted to republish the book, removing the “offensive” lines. Some hailed him a hero for his courage, others described him as weak for caving. He always sought to be inclusive even as he was profoundly committed to a traditionalist approach to Judaism and to the primacy of classical Halacha. Much as he tried he was never going to be able to please everyone.

It was in 1968, when in second year at university, that Lord Sacks went to New York to meet with the Lubavitcher Rebbe. True to the Rebbe’s style, in Lord Sack’s own words, “he did a role reversal. He started asking me questions, asking me what I was doing for Judaism on campus.” When he started his response, “in the situation in which I find myself…” the Rebbe stopped him: “No one finds themselves in a situation. You put yourself in a situation. And if you put yourself in one situation you can put yourself in another situation.” “Those words,” said Lord Sacks, “changed my life.” At the Rebbe’s behest he went on to get his semicha and he attributes becoming Chief Rabbi to that experience.

Frequent gatherings with the Rabbinate was always a spellbinding experience. The way he would weave his depth and breadth of Torah knowledge, often with contemporary disciplines, gave one insight into a rare multifaceted mind. It was always uplifting and inspiring. He had a unique gift of making Torah relevant and inspiring for everyone. There were times we didn’t see eye to eye and there were times when we argued, but it was always resolved amicably in the end because true leaders don’t bear grudges – they mend hearts.

Retiring from the Chief Rabbinate afforded him the time to travel the world. His name and fame grew as he assumed professorships abroad and inspired audiences throughout. A testament to his leadership qualities is that when no longer confined by the restrictions of his office, he was able to court respect across the Jewish spectrum as both left and right found hope in his message as he went to battle on the frontlines, combating Anti-Semitism and defending Israel. He became one of the most eloquent spokespeople for the Jewish world. In 2016 he won the coveted Templeton prize for his efforts in countering religious extremism while “affirming life’s spiritual dimension.” He was deemed an ambassador for the Jewish people as is evident from the outpouring of tributes from Jew and non-Jew alike, including many religious and political leaders, and indeed royalty. In the words of the Prince of Wales: “With his passing, the Jewish community, our nation, and the entire world have lost a leader.”

In one particular instance many years ago, when I took ill and told no one, he called me to offer encouragement. Somehow he knew. His words to me at the time, were words, he said, the Lubavitcher Rebbe said to him when he had battled cancer once before: “The world still needs you.”

The world needs the voice of Rabbi Lord Sacks now more than ever, and his legacy will live on through his teachings. May his memory be for a blessing.