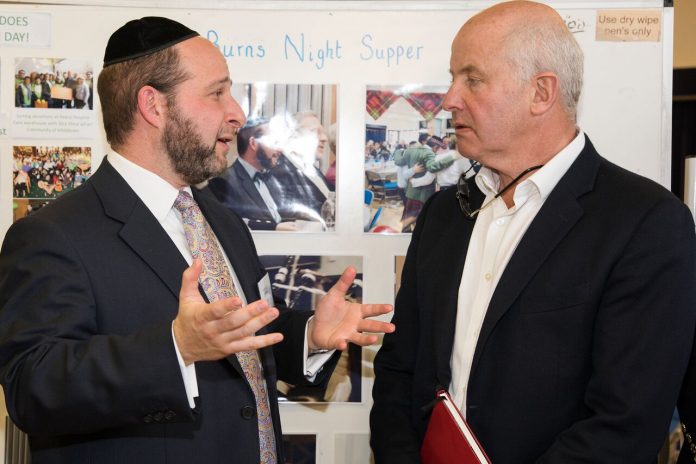 Not quite High Noon ,but closer to 2.30pm  last Friday afternoon, Bushey Synagogue  was honoured with a visit from the High Sheriff of Hertfordshire, Will Hobhouse, accompanied by his wife Kate and the mayor of Hertsmere Cllr Charles Goldstein.

The position of High Sheriff  has existed for at least 1000 years, it is the oldest continuous secular crown appointment, and was until the 20th century senior to the Lord Lieutenant of the county.

Traditionally the High Sheriff represents the monarchy in all matters relating to law and order.  These days, however, High Sheriff plays an increasingly active and supportive role in lending encouragement to voluntary sector organisations involved in crime reduction and social cohesion.

His visit to Bushey Synagogue, coincided with both Mitzvah Day and the annual Bushey Interfaith Forum meeting and he spent time discussing Bushey’s many interfaith, charitable and outreach programmes with Bushey’s Senior Rabbi, Elchonon Feldman, Synagogue Chair Sas Ezekiel, and many of the volunteers. He was also very interested in being able to view our Torah Scrolls, especially those which were rescued from Czechoslovakia after the Holocaust.