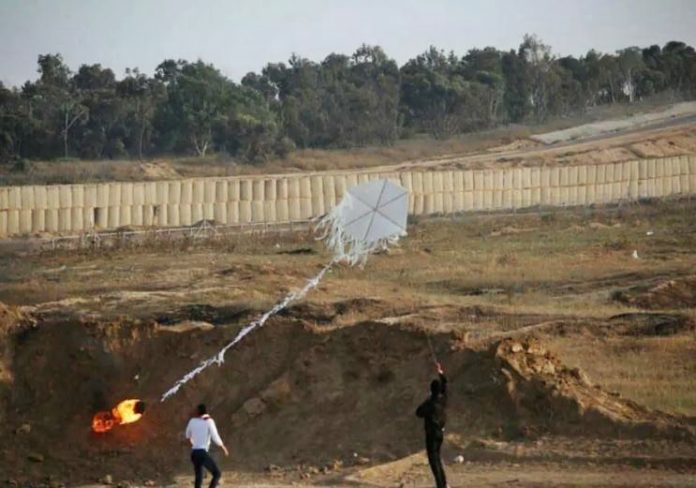 The Israel Defence Forces (IDF) has stepped up its response over the weekend to barrages of flying firebombs and explosive devices launched from the Gaza Strip.

Israeli aircraft targeted the vehicle of one of the leaders of the so-called “kite unit” on Saturday night, as well as a cell east of Boureij in the central part of the Strip, after hundreds of acres of agricultural land and nature reserves were destroyed by 17 fires near Israeli communities along the Gaza border during the day. Two Palestinians were reportedly injured.

On Sunday the Israel Air Force (IAF) carried out four airstrikes, three near Palestinians who were flying firebombs and kites, and one that hit a vehicle being used by one of the kite cells. The IDF said it had repeatedly warned and launched strikes several times near terrorist cells that were responsible for starting fires and destroying land in Israel.

Last night IAF planes attacked nine targets in two Hamas compounds in the northern Gaza Strip. One of the compounds was used as a site for weapons production. The IDF said that the air strikes were carried out in response to the flying firebombs.

Palestinians fired three missiles at southern Israel from the Gaza Strip early on Monday morning in response to the airstrikes. Two of the missiles fell inside Israel, while the third appeared to fall short of the border. There were no immediate reports of injuries on either side of the border, although 1,000 turkeys died yesterday from smoke inhalation when a fire started near their coops on Kibbutz Ein Hashlosha.

Responding to the fires on Saturday, Yesh Atid MK and former head of the Eshkol Regional Council Haim Jelin said: “This has been the hardest day for the Gaza periphery communities since the kite terrorism began. Where will it go? Members of the Security Cabinet, now is the time to put a stop to this and take action! Treat kites the same as Kassams [missiles].”

The Israel Nature and Parks Authority (INPA) has reported that 2,850 acres of nature reserve forests have been destroyed since the violence began on the Gaza border in late March.