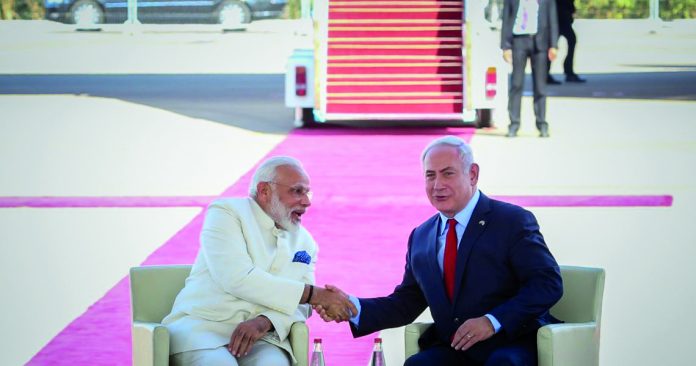 Narendra Modi became the first Indian prime minister to visit Israel this week as pomp and ceremony was once again seen at Ben Gurion International Airport. Benjamin Netanyahu personally greeted Prime Minister Modi as he stepped off his plane. He was then introduced to members of the cabinet, religious leaders of all the ethnic minorities and military heads.

There was a particular warm moment when the head of the Ahmadi Muslims in Israel was introduced to Modi. He thanked the Prime Minister Modi for doing so much for helping Ahmadi Muslims in India, who are persecuted by other Muslims. (Israel is the only country in the Middle East where Ahmadi Muslims can openly practice their Islamic faith).

The special airport ceremony, known as “segel aleph,” is an honour afforded to only a few select leaders, such as US presidents and popes. But Netanyahu thought this historic visit was so important for trade and friendship purposes. For many years India supported anti-Israel resolutions and constantly sided with the Palestinian narrative. Mr Modi deserves the honour.

Netanyahu has made great efforts to clear his diary in order to accommodate Narendra Modi’s visit. Normally when foreign leaders arrive in Israel, Netanyahu will give them a working meeting and then perhaps a lunch or dinner, but on this visit, the Israeli prime minister accompanied Modi around the country as if he were Modi’s personal tour guide.
From the airport, the two men visited one of Israel’s leading floriculture companies, with approximately 80,000 square meters of state-of-the-art greenhouses specializing in reproduction of plants. It was then on to Jerusalem’s King David Hotel, where the Indian prime minister checked in to the presidential suite for three nights. But a short time later, Modi made his way to the Yad Vashem memorial where he laid a wreath in the Hall of Remembrance.

Although the historic visit will see seven co-operation agreements signed between the two countries, including a two-billion dollar defence contract which will go to Israeli defence industries for surface to air missiles, Netanyahu’s objective is to construct and create a new strategic relationship with India.

Israel wants to convert the expertise in terror prevention and technology it is giving to India, which it sees as key in the geopolitical sea change, into concrete diplomatic advantage.

Prime Minister Netanyahu has said on several occasions that developing countries like India are now realising that Israel is part of the solution to their developing problems.

In fact despite the close ties India has with the Palestinian Authority, there was no scheduled visit to Ramallah, which is extremely unusual. The Indian ambassador to Israel, Pavan Kapoor, said in response to this point last week that India wishes to deal with Israel as a country completely separate from its relationship with the Palestinians.

Even India’s voting pattern at the United Nations is changing, abstaining much more whereas in previous years the county that today has a population of 800 million always voted with the Palestinians. But today India relies upon Israel as an important partner in sharing technology and innovation.

Prime Minister Modi also planned to visit the son of the late Rabbi Gavriel and his wife Rivka Holtzberg who now lives in Israel. The parents were brutally killed by terrorists in Mumbai in November 2008 whilst running the Chabad house. The Islamist attack left 188 people dead.

India and Israel gained independence from Britain within nine months of each other, but India had voted against the United Nations’ partition plan for British Mandatory Palestine and only recognized the State of Israel in 1950. Delhi’s foreign policy was characterised by a pro-Arab stance, despite Israeli military aid to India during India’s conflicts with China in 1962 and Pakistan in 1965. It wasn’t until 1992 that Delhi and Jerusalem established diplomatic relations.

Since then, Israel has emerged for India as a major weapons supplier as well as a trustworthy partner in defence research and development. Israel became a central player in India’s military calculations and has worked with India in areas of counter-terrorism, intelligence sharing and cyber security, as well as border and homeland security.