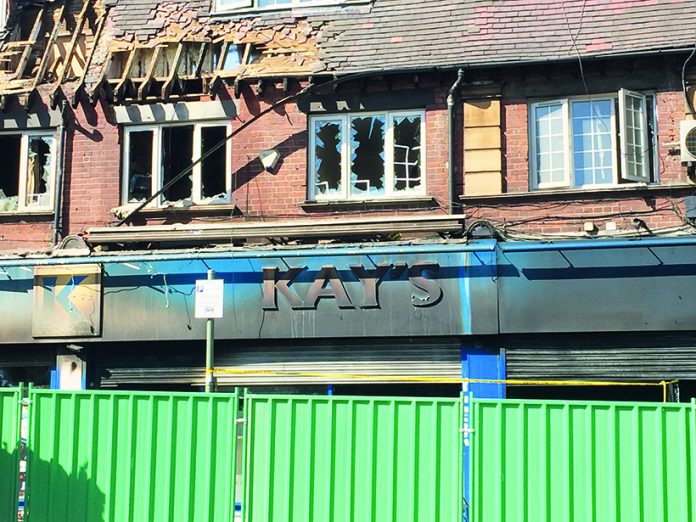 After a devastating fire last month that raged for more than ten hours, kosher food store Kay’s on Golders Green Road is likely to remain closed at least until 2019, according to a family source.

A number of members of the community were taken to hospital, mostly due to smoke inhalation, as well as several members of the London Fire Brigade (LFB) who attended. The LFB eventually brought the fire under control.

The fire left a number of people homeless, damaged people’s livelihoods and caused a high number of electrical power shortages to surrounding addresses for several days. In addition there was a great deal of disruption to traffic on Golders Green Road, and still today pedestrians are unable to walk on that side of the street due to the unsafe structure.
The newspaper shop next door to the four Kay’s shop fronts also remains closed, which is a great inconvenience to many in the community who relied upon a daily and weekend newspaper.

The London Fire Brigade Investigation Unit spent many days thereafter on the scene looking into the causes of the fire. After interviewing the owners of Kay’s, local residents and witnesses, and looking at CCTV footage, they did not find any evidence that the fire was deliberately started. But at the same time, they did not find any evidence of the cause of the fire either.

The control of the scene has now been returned to the owner of the property, who will now manage the scene until insurance claims are settled and work can begin to rebuild the structure.