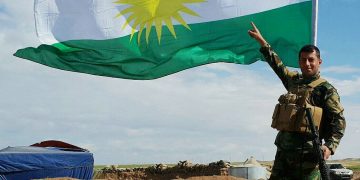 The Kurdistan Regional Government (KRG) has offered to freeze any implementation of the results of a disputed independence referendum and enter dialogue with Baghdad.
In a statement, the Government said: “Continued fighting does not lead any side to victory, but it will drive the country towards disarray and chaos, affecting all aspects of life.”
The KRG proposed that the Iraqi Government call an “immediate ceasefire and halt all military operations in the Kurdistan Region” adding that the KRG was willing to “freeze the results of referendum conducted in Iraqi Kurdistan” in order to “ start an open dialogue between the Kurdistan Regional Government and Iraqi Federal Government on the basis of the Constitution”.
Iraqi government forces captured the disputed region of Kirkuk last week, which had been held by the KRG since it forced ISIS out in 2014. The action was taken in response to the disputed independence referendum held by Kurdish authorities.
Iraqi Prime Minister Haider al-Abadi demanded that the Kurdistan Regional Government “cancel” the outcome of the referendum, calling it a threat to the “peaceful co-existence among Iraqis, and is a danger to the region”. Al-Abadi went on to say that he would “impose Iraq’s rule” in the area.
In related news, Israeli Prime Minister Benjamin Netanyahu said yesterday that Israel has “great sympathy” for Kurdish aspirations and that the world should concern itself with their wellbeing. Netanyahu said: “We have very great sympathy for their desires and the world needs to concern itself with their safety and with their future.”
On Friday, Reuters reported that Netanyahu raised the issue in phone calls with German Chancellor Angela Merkel and Russian President Vladimir Putin, as well as with French officials. It was also reportedly raised in a meeting between Israel’s National Security Adviser Meir Ben-Shabbat and senior US officials.