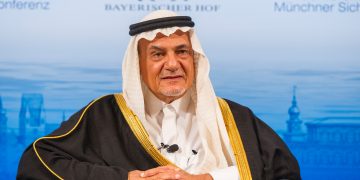 The former directors of Mossad and Saudi Arabia’s General Intelligence Directorate shared concerns about Iranian influence while speaking together at an event in New York this week.
Former Mossad Director Efraim Halevy and Saudi Prince Turki al-Faisal spoke together on a panel at an Israel Policy Forum conference to discuss Iran, the Syrian Civil War and the Palestinians.
Prince Turki discussed the Joint Comprehensive Plan of Action (JCPOA) nuclear agreement with Iran and said: “On the eve of the signing of the agreement, Iran painted a positive picture of itself as being friendly and open to negotiations. That couldn’t be further from the truth. The deal has made Iran overly adventurous, and caused it to adopt an expansionist policy.”
Halevy offered a more optimistic tone, saying that “Iran is undergoing some changes. They may not be as rapid as those taking place in the US at the moment, but things are moving”.
Prince Turki suggested that Israel should look to resolve the “Palestinian issue” before Saudi Arabia and Israel could present a joint stance against Iran. He said “Iran is a goal shared by my country and Israel, and if that’s the case then let us remove the Palestinian issue from the agenda. If we do so, then we can have back-channel talks.”
Although Israel and Saudi Arabia have no diplomatic relations, the two countries share mutual concerns regarding Iran’s regional ambitions and desire to acquire nuclear weapons. Prince Turki has shared a platform with Israeli officials before, alongside former National Security Adviser Yaakov Amidror at an event in Washington last year, and has publically met former head of military intelligence Amos Yadlin previously.
Prince Turki led Saudi intelligence from 1979 to 2001 before becoming Ambassador to the US. Efraim Halevy was director of Mossad from 1998 to 2002.