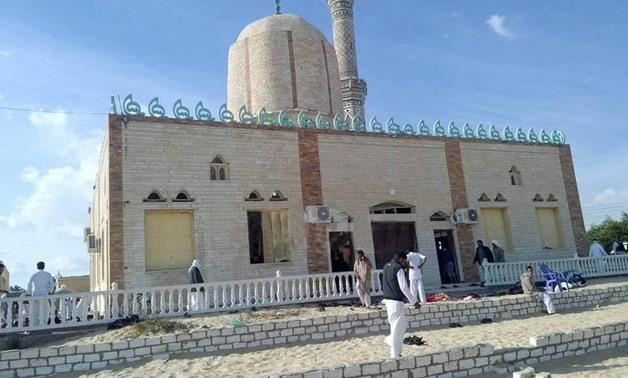 Egypt remains in mourning after one of the deadliest attacks in its modern history occurred last Friday on its soil in northern Sinai. At least 305 people were murdered with 27 of the dead being children as terrorists opened fire and tossed grenades into the Al Rawdah mosque where some 500 worshippers were praying.

A stampede broke out as hundreds rushed to the door screaming when the gunfire rang out and the blasts shook the mosque. Others tried desperately to force their way out of the windows.

Israel has offered assistance in seeking out and destroying terrorist bases in the Sinai which the Jewish state returned to Egypt under the 1978 Camp David Peace Accords. Foreign reports have often said that Israel uses drones to target ISIS bases in the area.
Those who survived the Mosque attack spoke of children screaming as they saw parents and older brothers mowed down by gunfire or shredded by the blasts. Some families lost all or most male members in the massacre.

The attack began when the Imam was about to deliver his Friday sermon from the pulpit. Some 30 heavily armed Islamist militants wearing camouflage and carrying Islamic State black flags, took up positions across from the mosque’s door and windows.
They had earlier arrived in masked and dressed with black T-shirts. The devastating attack lasted for around 20 minutes.

One witness, a 38-year-old government employee, who did not want to be named for fear of retaliation said “There was a stampede. I fell down and then bodies piled up on top of me.”

Ebid Salem Mansour was another witness who told police he was a 38-year-old worker in the nearby salt factory and only settled in the town 3 years ago to escape the bloodshed and fighting elsewhere in northern Sinai. He suffered two gunshot wounds in the legs.
“Everyone lay down on the floor and kept their heads down. If you raised your head you got shot.” Mansour also added the terrorists were shouting Allahu Akbar, or God is great and many of the worshippers recited their final prayers.

So, composed were the terrorists that they checked their victims for any sign of life after the initial round of blazing gunfire. Those still moving or breathing received a bullet to the head or the chest, the witnesses said. When the ambulances arrived they also shot at them before fleeing.

Egyptian President Abdel-Fattah el-Sissi ordered warplanes to hit targets in the Sinai last weekend and the Egyptian military said it targeted several vehicles in which some of the terrorists of the attack were travelling. Although it was impossible to independently verify the claim since the media is virtually banned from working in Sinai.

The victims were Muslims who follow the mystical Sufi branch of Sunni Islam which ISIS has branded heretic because of their less literal interpretations of the faith. Millions of Egyptians belong to Sufi orders, which hold sessions of chanting and poetry meant to draw the faithful closer to God. Sufis also hold shrines containing the tombs of holy men in particular reverence.

The Egyptian military and security forces have been waging a tough campaign against extremists in towns, villages and in the desert mountains of Sinai whilst Egypt has been in a state of emergency since last April. Across the country, thousands have been arrested in a crackdown on suspected Islamists as well as against other dissenters and critics, raising concern about human rights violations.

Seeking to spread the violence, ISIS over the past year have carried out deadly bombings on Churches in the capital Cairo and other cities, killing dozens of Christians. The terrorists are also believed to have downed a Russian passenger jet that killed 226 people over Sinai in 2016.

Last year, ISIS beheaded a leading local Sufi religious figure, the blind sheikh Suleiman Abu Heraz, and posted photos of the killing online. In the January edition of an IS online magazine, a figure purporting to be a high-level official in the Sinai affiliate of the group vowed to target Sufis, accusing them of idolatry and heretical “innovation” in religion and warning that the group will “not permit (their) presence” in Sinai or Egypt.
But last Friday’s assault was the first major terrorist attack on a Muslim congregation in Egypt far exceeding past attacks even dating back to the previous Islamic militant insurgency in the 1990’s.