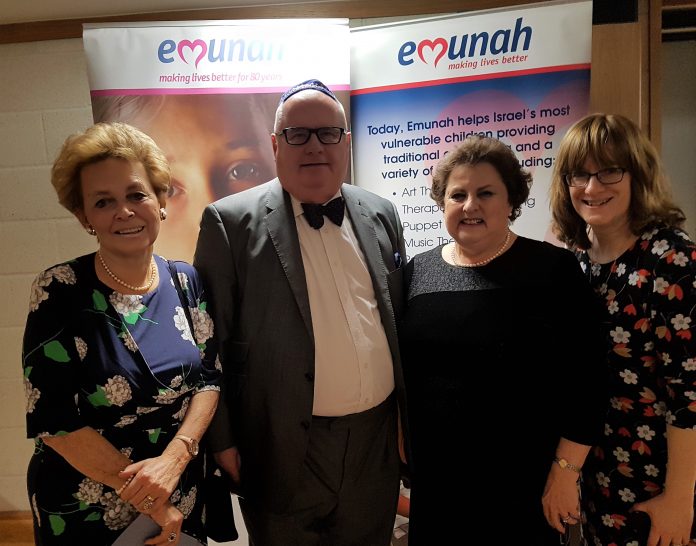 Former Secretary of State the Rt Hon. Sir Eric Pickles showed his support for Israel and the Jewish people when he spoke at Emunah’s Esther Cailingold Group’s recent dinner. Co-chaired by Reva Ross and Doris Lanzkron the event raised £4,000 for Emunah projects in Israel where the organisation is the largest provider of residential services for children including those who are vulnerable or at-risk.
Addressing an audience of 130 people at Mill Hill United Synagogue Sir Eric, who is a former chair of the Conservative Friends of Israel, spoke of his role as the Prime Minister’s special envoy on post-Holocaust matters and what antisemitism means today, and the importance of us being “custodians of the truth”.
Sir Eric Pickles said: “We are in this extraordinary place where it is necessary to clearly demonstrate what happened all those years ago… “[People are] hiding behind anti-Israel and anti-Zionism, which they substitute for antisemitism…”
On the subject of Israel, he said while it was legitimate to criticise the Israeli government it was “not legitimate to criticise Israel’s right to exist. It is not legitimate to compare Israel to the Nazis and it is not legitimate to boycott Israeli goods.”
Referring to Israel’s achievements, Sir Eric said that seven out of ten patients using our National Health Service benefitted from treatments for heart disease, dementia and other conditions, thanks to Israeli technology, as well technology for computers and phones.
Sir Eric added: “It is massively important that we hold onto the truth and the truth gets out.”
He was interested to hear about Emunah’s work in Israel having seen two short films following an address by British Emunah director Deborah Nathan. This included the sad case history of “little Leah” a young girl who was abused by her father and was now safely in the charity’s care.
Ms Nathan praised the Esther Cailingold committee – which was “a jewel in Emunah’s crown… You have been working for Emunah for so many years and have raised so much money, it has helped our children so much.”
Earlier, Reva Ross, the co-chair of Emunah’s Esther Cailingold group gave a warm welcome to Sir Eric Pickles, saying: “You are indeed a true friend of the Jewish people and of Israel.”
Committee members Rivka Persoff and Valerie Kohn also spoke – the latter gave the vote of thanks.