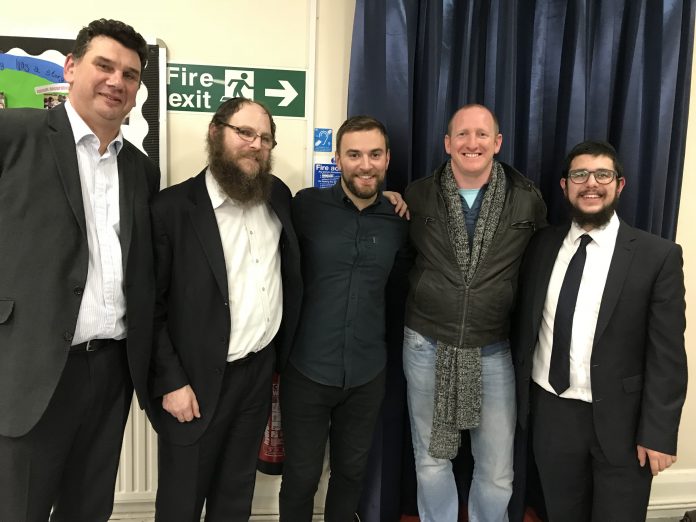 Woodford Shul has had an annual lecture in memory of Harold Weinberg who was a prominent member who died aged 65 in 1986. Harold was very involved in Jewish learning and education as well as the community and there has been an annual lecture ever since.
This year the Shul has partnered with JAMI as their Kol Nidrei charity and as a partner throughout the year to raise awareness of mental health issues.
As well as making a donation on Kol Nidrei, the Shul is running a number of events throughout the year including Mental Health First Aid training for all of the Shul’s staff and community members, JAMI conversation evenings with supper and discussion around mental health and mindfulness, and other talks and events.
Earlier this week the Shul held the annual “Harold Weinberg” lecture featuring Mental HEalth campaigners Jonny Benjamin and Neil Layton. Jonny and Neil met when Jonny was about to end his life by jumping off a bridge in Central London, and Neil, a complete stranger, stopped to help him. The story featured in the documentary “The Stranger on the Bridge”, a story of simple human kindness and caring. Jonny survived and went on to become a champion for Mental Health causes, saving other lives in the process through helping people to talk about and destigmatise mental health. He only met Neil again six years after the initial event when they were reunited and now they both campaign together.
As part of the JAMI partnership, Jonny and Neil spoke to over 150 people at Woodford Forest United Synagogue, Essex marking the Harold Weinberg lecture 2017.
Rabbi Mordechai Wollenberg, Senior Rabbi of Woodford Forest, introduced the talk with reference to the idea that saving one life is like saving a whole world, one explanation being due to the ripple effect – seen very much in this case with Jonny going on to help many more people and save lives.
Graeme Taylor, Vice-Chairman of WFUS gave a vote of thanks and a presentation at the end.
Rabbi Wollenberg said “we are humbled by the number of people who came to this important presentation. If just one person feels able to speak out, and not suffer in silence, we will have achieved something. With suicide as the main cause of death in men under 45, this is literally life-saving work. We are incredibly grateful to Jonny and Neil for their moving and thought-provoking presentation of this very human story and we look forward to continuing to build a strong and mutually beneficial partnership with JAMI to help their vital work in our community”.