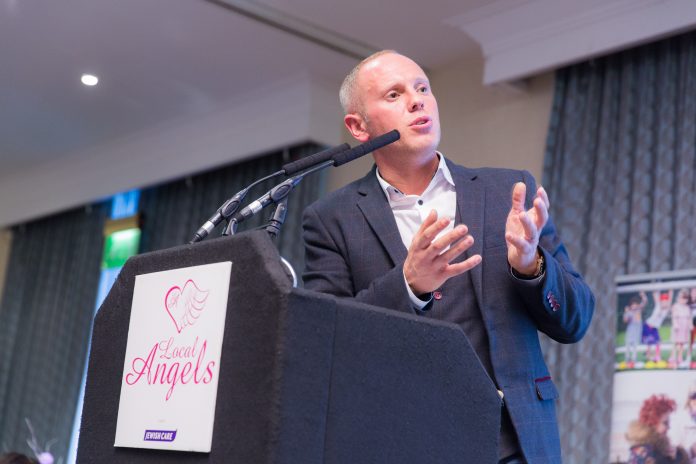 Celebrity Judge, Robert Rinder entertained guests with his stories of his rise to fame, strictly and his love for languages at the 9th annual Local Angels lunch in Essex on Thursday 23 November. No stranger to Jewish Care, having spoken at three in the last few months, Judge Rinder said; “One of the benefits of being in the public eye is you are gifted to be an ambassador for charities”.
He went on to talk about how as a community he feels we can combat anti-Semitism, not by trying to defend, but by showing others how we care and support each other; “the example I give is Jewish Care – it reminds me that as a community we have something special we can share with the wider community and that is derech eretz – the spirit and responsibility of looking out for our elders. Jewish Care represents and articulates the very best of our community.”
The lunch raised a record £34,500 to help support local services, for people age 3 to 103+, provided by Jewish Care in Redbridge and the wider Essex area.
Over the last nine years, the Local Angels Committee have raised £225,00 helping to fund local services including the Jewish Care buses transporting older people to Jewish Care’s Redbridge Jewish Community Centre (RJCC), The Dennis Centre for people living with dementia and the Memory Way Cafe. They have helped fund one to one support for children with special needs to attend holiday schemes at Jewish Care’s RJCC and the MIKE leadership training programme for teenagers as well as contribute to the Mitkadem allotment for people with mental health needs.
Marlene Sugarman gave an emotional appeal speech in memory of her mother, Hetty Yaros who passed away in April of this year and was cared for by Jewish Care. She spoke about how Sinclair House – The Redbridge Jewish Community Centre has always been part of her family’s life but it wasn’t until her mum became ill that she realised quiet how much support Jewish Care had on offer;
“I no longer take for granted the amazing services of Jewish Care and how unknowingly they have always been a part of my family’s life and were there to support me at a most difficult time. Making my mums deterioration easier to bear by guiding and giving me, first the help in allowing my mum to retain her independence and then the options on how best to care for my mum when she could no longer care for herself.
Even though I had been using the services of Jewish Care to facilitate meals for mother, I never realized just how important their support was to us as a family until we reached crisis point. Phone calls were made and the response was immediate, the genuine concern, empathy and understanding that was shown to mother and indeed extended to me, greatly eased the trauma of moving mother into residential care. The special care and support Jewish Care gave to us in this most difficult time has had a huge impact on us as a family and we will be forever grateful”.
Speaking after the event, Chair of Local Angels Committee and Jewish Care Trustee, Gayle Klein said, “Judge Rinder proved a real hit with the guests, he was warm, open and extremely entertaining. I’d like to thank all of our guests for their generosity and thank the Committee for their hard work which makes us so proud of everyone at the Local Angels events.
“The money we have raised will make a real difference to the lives of the most vulnerable members of our community. Increasing numbers of people are turning to us as we are living longer and with more complex needs.”